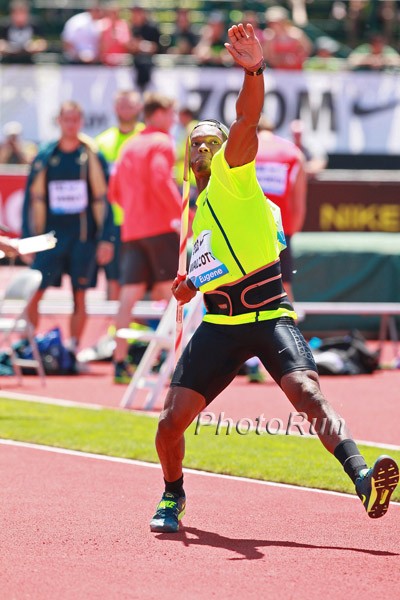 (The 42nd Prefontaine Classic, a member of the IAAF Diamond League of elite international track & field meets, will be held May 27-28 at historic Hayward Field.)

The reigning Olympic and World champions are set to compete for the first time on U.S. soil in this event, and the field includes 6 of the top 8 in the Track & Field Newsworld rankings.

Julius Yego, 27, is one of the javelin’s most intriguing athletes. Born and raised in distance-rich Kenya, he studied using internet videos of javelin legendaries Jan Zelezny and Andreas Thorkildsen. Yego joined that exclusive club of gold medalists last year at the World Championships in Beijing, and his winning throw of 304-2 (92.72) was the farthest in the world since 2006.

Yego has seen many sides of excitement – and contributed drama as well.  In his first major international meet, he threw a lifetime best to make the final of the 2012 Olympics, eventually finishing 12th.  A year later, he PRed by over 10 feet and was on the verge of a medal at the 2013 World Championships in Moscow until the last round kept him off the podium.  Even Yego’s best heave last year at Beijing came after he was on the brink of not making the final.

Keshorn Walcott shocked the world with his Olympic gold medal in 2012, the crowning jewel in an undefeated season. He was only 19 then and his return to Trinidad on August 13 was declared a national holiday.  Since then, he has improved by more than 18 feet (5.5 meters) to 295-9 (90.16), and become the first thrower to exceed 90 meters (295-3) in a Diamond League meet.

Vitezslav Vesely, 33, of the Czech Republic was the Moscow World Championships gold medalist in 2013, the second straight year he was ranked No. 1 in the world by T&FN.  He is the only thrower to have been ranked among the world’s top 5 by T&FN in each of the last five years.  Vesely, a two-time Diamond League winner (2012 & ’13), missed a medal in the London Olympics by less than a yard/meter.

Egypt’s Ihab Abdelrahman, who will be 27 on May 1, joins Yego and Walcott as his country’s lone world-ranking javelin thrower.  He took the silver medal in Beijing last summer, helping him to a No. 5 world ranking by T&FN after a No. 3 in ’14.  Yego is the only African who has thrown farther.

The German pair of Thomas Rohler, 24, and Johannes Vetter, 23, are still seeking their first major international medals, though Rohler was less than a foot away (0.23) in Beijing last year.  Rohler, the 2014 Diamond League winner, was ranked No. 2 in the world by T&FN  that year and No. 4 last year.  Vetter, who was seventh in last year’s World Championships, has the early 2016 world lead at 272-2 (82.96).

No one in the field has as many major gold medals (3) or world No. 1 rankings (5) as Andreas Thorkildsen.  The Norwegian superstar, who will be 34 on April 1, has missed most of the last two years due to injuries.  He has pointed to making a strong comeback in 2016, with the goal of winning a third Olympic gold (having won in 2004 and 2008, as well as the World Championships in 2009).  Prior to being sidelined, Thorkildsen was ranked no lower than No. 6 by T&FN for eight straight years beginning in 2004, and his five No. 1s are behind only legends Janis Lusis (9) and Jan Zelezny (7).

Tickets for the 42nd annual edition of the Prefontaine Classic, to be held May 27-28 at Hayward Field in Eugene, Ore., are available now at www.GoDucks.com as well as from 1-800-WEBFOOT.  Sponsored by NIKE continuously since 1984, the Prefontaine Classic will be shown live to an international audience and by NBC Sports.

The Prefontaine Classic is the longest-running outdoor invitational track & field meet in America and is part of the elite IAAF Diamond League of meets held worldwide annually.  The Pre Classic’s results score has rated No. 1 or No. 2 in the world in each of the last five years by All-Athletics.com, the official data partner of the Diamond League.

Steve Prefontaine is a legend in the sport of track & field and is the most inspirational distance runner in American history.  He set a national high school 2-mile record (8:41.5) while at Marshfield High School in Coos Bay, Oregon, that is still the fastest ever in a National Federation-sanctioned race.  While competing for the University of Oregon, he won national cross country championships (3) and outdoor track 3-Mile/5000-meter championships (4), and never lost a collegiate track race at any distance.  As a collegiate junior, he made the 1972 U.S. Olympic Team and nearly won an Olympic medal, finishing 4th in the 5K at the 1972 Munich Olympics, at age 21.  After finishing college in 1973 and preparing for a return to the Olympics in 1976, he continued to improve, establishing all the American records from 2000 to 10,000 meters.  His life ended tragically on May 30, 1975, the result of an auto accident, at age 24.  The Pre Classic began that year and has been held every year since.