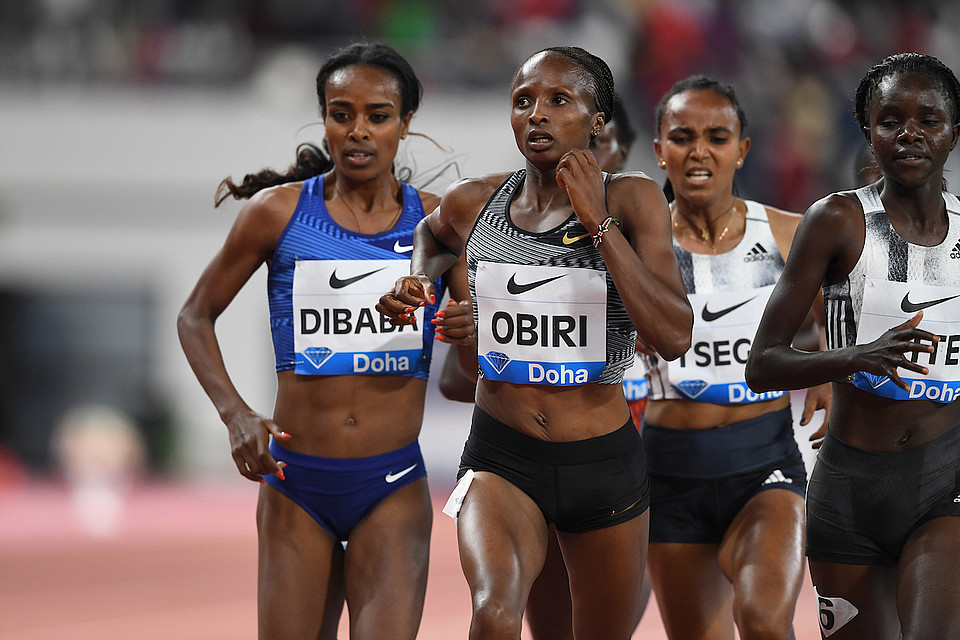 The greatest field of women distance runners ever assembled on American soil will step to the starting line for the Prefontaine Classic 3,000-meter race.

Stanford, California – The greatest field of women distance runners ever assembled on American soil will step to the starting line for the Prefontaine Classic 3,000-meter race.

Hellen Obiri, 29, is the world’s dominant runner at 5k, winning a second-straight Diamond League trophy last year and duplicating a repeat No.1 at the top of the Track & Field News world rankings. She’s also the reigning world champion, winning her first outdoor global gold at the London World Championships after a silver in Rio.

Her first major gold came in the 3k (2012 World Indoor), and while the 3k might appear as a natural sweet spot for her – she owns the world’s fastest outdoor time since 1993 at 8:20.68 – her range is growing. She turned back all challengers in March at the World Cross-Country Championships at 10k. Obiri is undefeated this year, including winning the Doha Diamond League 3k in a world-leading 8:25.60 earlier this month.

Sifan Hassan, 26, won the Diamond League 1500 trophy in 2015 and a year later captured her first major gold at the 2016 Portland World Indoors. The Ethiopian-born Dutch runner returned to the U.S. to train with the Nike Oregon Project and the results have continued to impress.

This year she has shown even more range with a February 5k road world record 14:44, April half-marathon 65:45 (fastest ever by a non-Kenyan), and a 10k debut to win Stanford’s Payton Jordan Invitational earlier this month in 31:18.12.

Genzebe Dibaba, 28, owns seven world records or bests and her Pre Classic record is unblemished – undefeated in three races. All of her Pre Classic races have been in the 5k, including 2015 – the year she was named Woman of the Year by T&FN – when she outran the pacesetters and clocked 14:19.76, the fastest ever run in the U.S.

Genzebe is not the only Dibaba family member to be T&FN Woman of the Year or to appear at the Pre Classic. Her older sister, Tirunesh, earned the same title in 2008, the year she set the still-standing 5k WR of 14:11.15. Both sisters are part of the Pre Classic magic – neither has lost in a combined six appearances.

Ethiopia’s Senbere Teferi, 24, will also be running her first track race in the U.S. She has been world ranked by T&FN in each of the last four years in the 5k, where her best of 14:23.33 is No. 9 on the world all-time list (No. 6 by an Ethiopian). In 2015, she was silver medalist at the Beijing Worlds, part of a 1-2-3 Ethiopian medal sweep in between Ayana and Dibaba. Earlier this year she ran a 65:45 half-marathon.

21-year-old Letesenbet Gidey was bronze medalist at the World Cross Country Championships in March after winning the 2015 and ’17 Junior (U20) editions. On the track, she is No. 8 on the world all-time 5k list with a best of 14:23.14. She was runner-up in last year’s Pre Classic 5k and earlier this month debuted in the 10k with her first national title at 32:10.2, the fastest ever run in Ethiopian capital of Addis Ababa (altitude 2346m above sea level – just 3 feet shy of 7,700 feet).

Kenya’s Caroline Chepkoech Kipkirui, who will turn 25 on May 26, was runner-up in the 2017 Diamond League 5k final and has world ranked No. 7 in each of the last two years. Last August she won a third-straight Falmouth Road Race 7-miler, a feat matched only by the legendary Joan Benoit Samuelson (1981-83) and course-record holder Lornah Kiplagat (2000-02). Her half-marathon best of 65:07 makes her No. 6 on the world (and Kenyan) all-time list.

Lilian Kasait Rengeruk, 22, has world-ranked in the top 10 by T&FN the last two years. The Kenyan was runner-up in 2017’s Pre Classic 5k and earlier this month lowered her 3k PR to 8:29.02 with a 3rd-place in Doha Diamond League. She was bronze medalist in the 2017 World Cross Country Championships and won World Youth gold at 3k in 2013.

Beatrice Chebet, 19, won the World Junior cross-country championships in March and also last summer’s World Junior 5k title in Finland for Kenya. This will be her first race in the U.S.
Another member of the Nike Oregon Project training in Portland, Konstanze Klosterhalfen, 22, set a German record winning the Women’s Wanamaker Mile at the Millrose Games in 4:19.98 before a silver at the European Indoor 3k in March.

Laura Weightman, 27, captured her second Euro 1500 bronze last summer. The 2014 Commonwealth Games 1500 silver medalist was a finalist in both of the last Olympic 1500s, as well as the London Worlds.

Rachel Schneider, 27, recorded an early-season world-leading mark in the 5000 last week at the USATF Distance Classic in Eagle Rock, CA. The Georgetown grad knocked 9 seconds off her personal best with a 15:06.71 clocking.

Karissa Schweizer, 23, won 6 NCAA titles while at Missouri – 5 on the track plus one in cross-country. Last year the Iowa native broke an almost 9-year-old collegiate indoor 3k record at 8:41.60 (previously held by Jenny Simpson).