Pre Classic Presents the Battle of the Shot Golds 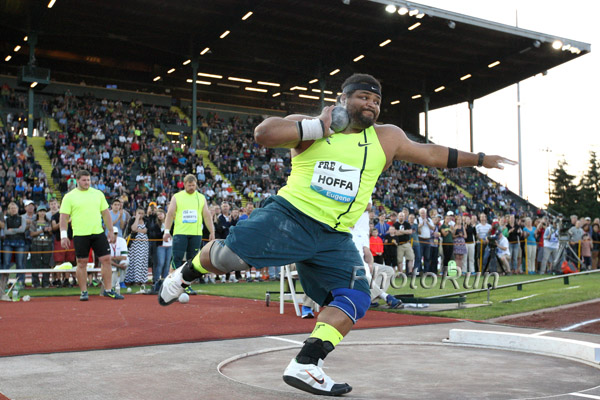 A gold medal appears to be the price of admission into the men’s Shot Put at the 41st Prefontaine Classic at historic Hayward Field on May 29-30.

Pre Classic Presents the Battle of the Shot Golds

Eugene, Oregon – A gold medal appears to be the price of admission into the men’s Shot Put at the 41st Prefontaine Classic at historic Hayward Field on May 29-30. A member of the prestigious IAAF Diamond League of elite international track & field meets, the Pre Classic is the longest running invitational in the United States.

If history is any guide, the Pre shot will provide an advance look at the potential medalists in the IAAF World Championships to be held in Beijing later this summer. The field will include all of the Olympic and World Championships gold medalists since 2006, and the Numbers 1 thru 8 throwers on the All-Athletics.com world rankings list.

Team USA’s Reese Hoffa won gold medals in the 2006 World Indoor and 2007 World Championships, and has something none of his competitors can boast:  two IAAF Diamond League trophies. For his achievements in 2014, Track & Field News magazine ranked Hoffa No. 1 in the world, his 4th time to win that accolade.

David Storl  of Germany is the reigning two-time World Champion, winning in Moscow (2013) and Daegu (2011) He is set to make his first Prefontaine Classic appearance.  Storl's gleaming collection of international golds also includes the World Junior (2008), World Youth (2007) and European (2012, 2014) Championships.  He is Germany’s third farthest ever at 72-1 (21.97), trailing only a pair of former world record holders in Udo Beyer and Ulf Timmermann.  Storl, still just 24, was not yet born when the East Germans made their big throws in the 1980s.

The list of global conquerors includes two-time Olympic gold medalist Tomasz Majewski of Poland (2008 and 2012), the first European to successfully defend an Olympic title in the shot.  At 6-8 ½ (2.04) and 300 pounds (140 kg), the 33-year-old could blot out the sun at the Pre Classic, except that the event will be held on Friday evening in conjunction with Distance Night in Eugene.

Rounding out the gold medalists, American Christian Cantwell is the winner of four world titles, led by a record three indoors (2004, 2008 and 2010) as well as the 2009 World Championships outdoors in Berlin. The Missouri grad's PB of 73-11 ½ (22.54) is the farthest throw of the past decade.

The three remaining entrants could well join the others as World Championships medal aspirants.  Reigning U.S. champ Joe Kovacs was 4th in the 2012 U.S. Olympic Trials – behind Hoffa, Whiting and Cantwell.  Jamaican record holderO’Dayne Richards was gold medalist in the Commonwealth Games last summer, while New Zealand record holder Tom Walsh, just 22, was bronze medalist at last year’s World Indoor Championships.  Walsh is the only thrower in the field yet to break the 70-foot barrier.  It would be appropriate to do it at Hayward Field, which has seen more 70-foot throws than any other venue in the world.

Tickets for the 41st annual edition of the Prefontaine Classic, to be held May 29-30 at Hayward Field in Eugene, Ore., will be available on Feb. 20th from goducks.com and from 1-800-WEBFOOT.

The Prefontaine Classic is the longest-running outdoor invitational track & field meet in America and is part of the elite IAAF Diamond League of meets held worldwide annually.  The Pre Classic’s Results Score (quality of performances) has been rated No. 1 or No. 2 in the world in each of the last four years by All-Athletics.com, the official data partner of the IAAF Diamond League. Sponsored by NIKE continuously since 1984, the Prefontaine Classic will be shown live to an international audience and by NBC Sports from 1:30 till 3:00 p.m. PT on Saturday, May 30.

Steve Prefontaine is the most inspirational distance runner in American history.  He set a national high school 2-mile record (8:41.5) while at Marshfield High School in Coos Bay, Oregon, that is still the fastest ever in a National Federation-sanctioned race.  While competing for the University of Oregon, he won national cross country championships (3) and outdoor track 3-Mile/5000-meter championships (4), and never lost a collegiate track race at any distance.  As a collegiate junior, he made the 1972 U.S. Olympic Team and nearly won an Olympic medal, finishing 4th in the 5k at the 1972 Munich Olympics, at age 22.  After finishing college in 1973 and preparing for a return to the Olympics in 1976, he continued to improve, setting many American records.  His life ended tragically on May 30, 1975, the result of an auto accident, at age 24.  The Pre Classic began that year and has been held every year since.