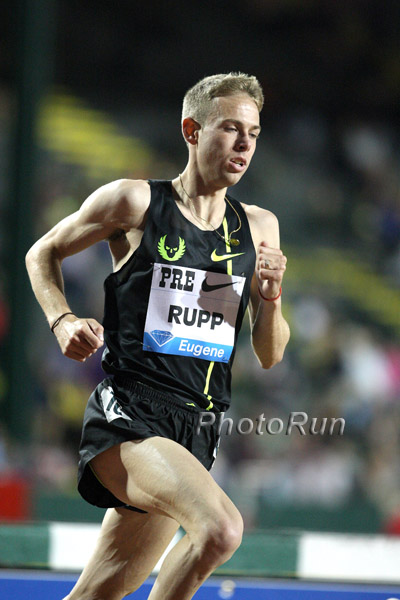 The Pre Classic 5000-meter race has a history of producing fast races, including the only sub-13:00 times—five and counting--recorded on U.S. soil.

Eugene, Oregon – The Pre Classic 5000-meter race has a history of producing fast races, including the only sub-13:00 times—five and counting--recorded on U.S. soil.

Fast, competitive races were one of Steve Prefontaine’s loves in track, and meet organizers have assembled a field with the top available runners in the world.  This year’s meet will mark 40 years since Prefontaine’s last race on May 29, 1975.

Two of America’s greatest are among the stars in the field, U.S. record holders Galen Rupp and Bernard Lagat.  Combined, they own every AR at a championship distance from 1500 to 10k.

Galen Rupp is America’s top-ranked 5k runner, No. 4 last year in the Track & Field News world rankings, breaking a streak of nine years by Lagat as the top American.  Rupp’s prime jewel last year was a No. 1 world ranking in the 10k, mostly due to his American record at last year’s Pre Classic that was the fastest in the world.  Rupp’s 2012 Olympic 10k silver medal was the best by an American since Billy Mills won gold in 1964, and his London Olympic 5k 4th matched the best by an American since 1972 – run by 21-year-old Steve Prefontaine.  Last year Rupp won his sixth U.S. title at 10k, most in the post-World War II era.

Bernard Lagat is the only American to win major golds in the 1500 and 5k in the same year (2007).  He owns more Pre Classic titles at men’s distances above 1500 meters (5) than anyone except steeplechase Hall of Famer Henry Marsh (7).  Lagat won his seventh U.S. 5k crown last year, giving him the most in history.  Lagat has competed in the Pre Classic in 13 of the last 14 years.

Yenew Alamirew is Ethiopia’s top ranked 5k runner over the last two years, ranking No. 2 in the last two world rankings by T&FN.  The 2013 IAAF Diamond Trophy winner has improved each year since his first Pre Classic appearance as a 21-year-old in the 2011 Bowerman Mile (7th).  He was runner-up in last year’s Pre 5k.

Edwin Cheruiyot Soi of Kenya has run sub-13:00 in each of the last six years, a career streak exceeded only by world record setters Haile Gebrselassie (9) and Kenenisa Bekele (8).  The 2008 Olympic bronze medalist, Soi won the 2013 edition of the Pre Classic, beating Olympic gold medalist Mo Farah, who set the U.S. all-comers best of 12:56.98 in winning Pre a year earlier.

Albert Rop of Bahrain set an Asian record 12:51.96 in 2013, still No. 3 on the all-time world junior list.  He earned bronze at last year’s Asian Games and was fourth in last year’s Pre Classic.

Ryan Hill of the U.S. has only lost once thus far in 2015, by 0.20 in the Millrose 5k.  His victories include the U.S. indoor 2-mile title.  He is a former NCAA indoor runner-up to Lalang, and he won ACC titles in both the indoor mile and 10k (twice) while at North Carolina State.

Australia’s Collis Birmingham is the only man to compete in all of the Pre 5ks in the IAAF Diamond League era.  He twice set PRs at the Pre Classic before his all-time best at his second Olympics at London.

Juan Luis Barrios is undefeated on the track thus far in 2015, including a 5k victory at Stanford’s popular Payton Jordan Invitational.  A two-time Olympian, he has Mexico’s best Olympic 5k finishes (7th in 2008, 8th in 2012) since the 4th by Juan Martinez in the 1968 Mexico City Games.  He is Mexico’s second-fastest 5k runner, trailing just the 13:07.79 of Arturo Barrios (no relation) set 36 years ago.

Cornelius Kangogo of Kenya was silver medalist at the 2014 African cross country championships.

All in all, it's a field that Pre would have loved to match himself against.