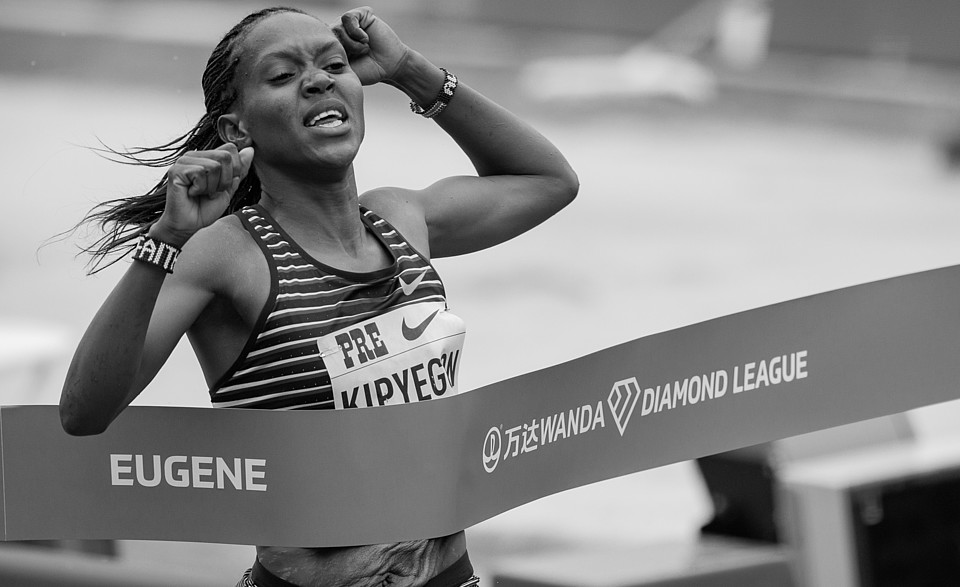 Faith Kipyegon even managed to surprise herself today in the Diamond League Women’s 1500m, blasting to a 3:52.59 world lead and meet record for her season opener.

“I was not expecting such a quick time today. It was a little bit windy, some rain, running a meet record was a surprise,” the double Olympic champion said post-race (Kipyegon is only the second woman ever to win back-to-back gold medals in the 1500m).

Kipyegon thought that her competitor, Ethiopian Gudaf Tsegay was eyeing the world record. “As you could see she went very fast at the start. I just wanted to open my season in a nice way,” Kipyegon said, “My important race is the World Championships in July. This is a really good indicator for me.”

Tsegay, who finished in 3:54.21, said post-race that her training focus is on the 5,000m, and that when faced with Kipyegon a lack of speed training showed. The Tokyo bronze medallist is not ruling out a world record attempt at the 5,000m distance.

On racing decorated athletes like Kipyegon and Tsegay, DeBues-Stafford says you have to “strike the balance between having respect for your competitors, but not so much that you don’t believe you can beat them.”

“That being said,” she added, “Faith Kipyegon is probably the best 1500m runner this sport has ever seen. Gudaf [Tsegay] is probably number two, they’ve run incredible times that at my peak fitness, I could maybe get to, but you have to pay respect where respect’s due. But it’s still May, and I’ve only done like two weeks of 1500m work. I don’t know what they’re doing. They might be doing the same thing in which case that’s terrifying!”

On the men’s side, several men lined up eying the world championship standard of 3:35.00.

Neil Gourley of Great Britain took the lead when the pacer stepped off the track, a strategy he had resigned himself to pre-race.

“The plan today was just to get to the front and do the work myself,” Gourley said afterwards,  “I’ve been in a few races now where people haven’t really gone after the pace or the pace has slowed down. To be fair, it’s only up to yourself as an athlete to take charge, so I did that today. I did all the hard work and it paid off with a world qualifying time.”

Hitting the world standard was particularly satisfying for the 27 year-old, as he was dealing with injury last summer. “It’s been nice to be healthy,” Gourley said, “Last year I sat at home and watched the Olympic Trials and the Olympics and it stung a lot. There was already fuel for the fire but now there’s more and more of it.”

Samuel Tanner of New Zealand was able to eke out the win ahead of Gourley.

“I put my eyes on his back, and came up on his shoulder on the final bend,” Tanner said. He is hoping that New Zealand will officially announce in the next few days, but already has his head turned towards returning to Hayward in July, “I love this track and the atmosphere it has, the Hayward Magic.”

Tanner plans to return home and compete in the Oceania Track Championships, and then get in another training block before toeing the line at Hayward again in July.

Vincent Ciattei of Eugene’s own Oregon Track Club took third place. The podium finish in front of the home crowd was bittersweet, as he missed the world standard by 0.07 of a second.

“It was almost a really great day,” Ciattei said post-race, “missing the time by seven hundredths stinks a bit.”

Nevertheless, he was grateful for the support of the Eugene crowd, “[the support] feels awesome, it’s taken me a little while, but that’s definitely the best performance I’ve turned in here [at Hayward Field]” he said, “I still have some work to do, still have to get the time, but today shows that if I take care of the time, I can be competitive with the top Americans on the right day.”

Ciattei was the top American in the 1500m, though many of the event’s heavy hitters were slated for the Bowerman Mile later in the day.