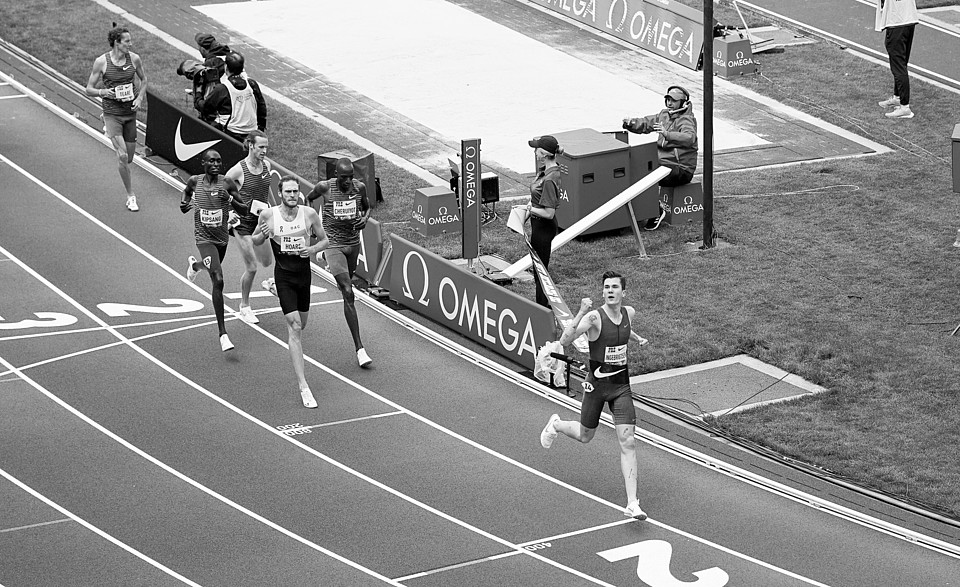 The Bowerman Mile was one of the most anticipated events at the 2022 Prefontaine Classic, and the competitors did not disappoint. The penultimate event on Saturday afternoon was filled with personal bests and a world lead.

Jakob Ingebrigtsen won the race in a time of 3:49.76, the fastest mile time in the world this year. This was the second Bowerman Mile title for Ingebrigtsen after winning at last year’s Pre Classic.

For Ingebrigtsen, the win on Saturday is a good sign for his performances later in the summer. Both the Pre Classic and upcoming World Athletics Championships are held at Hayward Field at the University of Oregon, giving athletes a good sense of what the upcoming competition will be like.

“It feels like home. It’s always a lot of fun to come here, with Nike hosting,” said Ingebrigtsen. “Winning at the same stadium also helps a lot.”

Ingebrigtsen plans to return home to Norway for training before he comes back to Hayward Field later this summer. The Olympic 1500 meter gold medalist and World Indoor Championship silver medalist still believes there is work to be done to prepare for July.

“I feel a lot of confidence, but at the same time I need to really put in the work [for the] next couple of weeks,” said Ingebrigtsen.

Like Ingebrigtsen, Australia's Ollie Hoare also has plans for improvement before Worlds. The On Athletics Club runner finished second in the Bowerman Mile with a time of 3:50.65, a new personal best.

“[I was] trying to push through for the last 100,” said Hoare. “It was a good finish.” The final stretch of the race was a tight battle between Hoare and the next three finishers. The second through fifth place runners all finished within 0.30 seconds of each other.

Timothy Cheruiyot finished behind Hoare in third place with a time of 3:50.77. The Kenyan athlete won the Bowerman Mile in 2018 and 2019 and finished third in the event last year.

“The race was good,” said Cheruiyot. “I had some injury but now I’m well,” he added.

The 2019 1500m world champion will be returning home for the next several weeks before coming back to defend his title in Eugene this summer.

Former Oregon runners Cole Hocker and Cooper Teare returned to their college track to run the Bowerman Mile on Saturday. The two finished in fifth and sixth place respectively, but were the top two American runners in the event.

Hocker, who ran 3:50.97, expressed disappointment in his finishing place but was satisfied with his time. He explained that he felt boxed in during the race.

“Kind of unfortunate today, but still gives me confidence moving on,” said Hocker. “It’s also a big confidence boost to be able to run a 3:50 mile like that in such a tactical race.”

The tactical aspects of running were Hocker’s focus on Saturday as he discussed his plans for improvement in future races.

“A small error can kinda cost you, today, two or three positions,” Hocker said. “If I have that insight in the future, ability to think on the fly like that, I’ll sharpen that up as well.”

Hocker, who became a professional runner for Nike after his first year at the University of Oregon, was known in his collegiate races for his finishing kick. However, the Tokyo Olympic finalist knows that he’ll need to adapt in order to improve his placing on the world stage.

“It should be the fastest miler, the fastest 1500m guy, comes out on top—not the best kicker on the day,” said Hocker. He and Teare have been “doing a lot of hard training” together to prepare for the Pre Classic and Worlds.

“We’re doing everything together, and I think with a little bit of positioning and stuff, I can be right there as well,” said Teare. He finished the mile with a time of 3:51.70.

Like Hocker, Teare was also focused on the tactical side of running.

“A couple tactical errors maybe put me out of it before I had the chance to put myself in it,” said Teare, discussing Saturday’s race. “I think I showed that I’m capable of doing it, but also that there’s a lot of experience to gain from this.”

As Hocker and Teare prepare for the World Championships on their home turf, they appear confident in their ability to make the U.S. 1500m team and the finals in July.

“Next time I see all these guys, [hopefully] it does go a bit differently.”