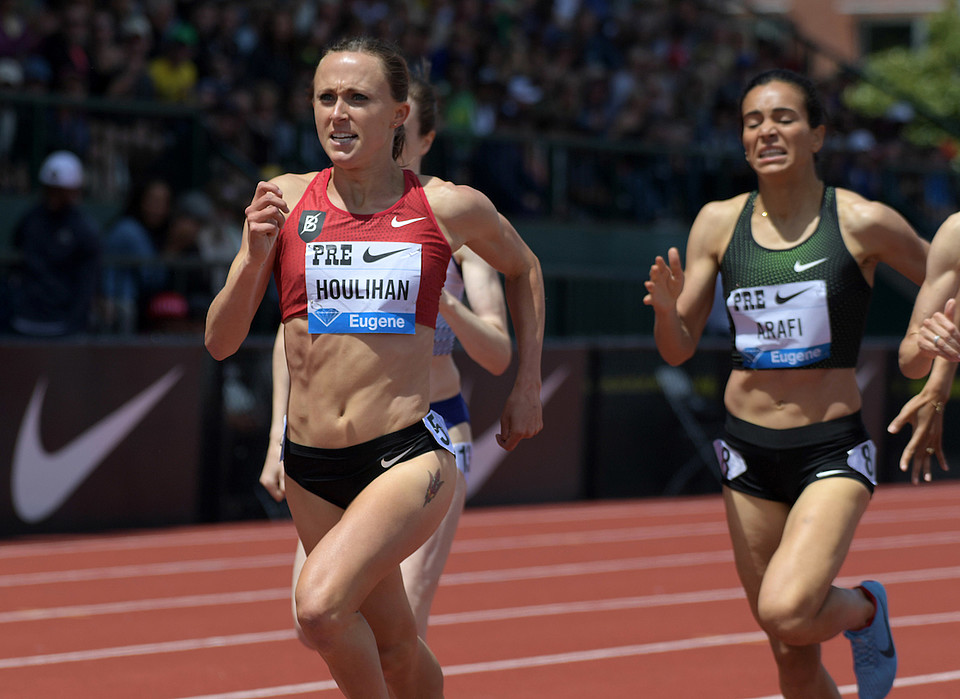 Olympic gold medalist Faith Kipyegon, IAAF Diamond League winner Laura Muir and reigning World No. 1 Shelby Houlihan will race against each together. Their only previous meeting was at the 2017 Pre Classic 1500, a race won by Kipyegon.

Stanford, California – The rulers of the women’s 1500 meters will come together in a rare meeting at the Prefontaine Classic.

This match-up will be just the second time that Olympic gold medalist Faith Kipyegon, IAAF Diamond League winner Laura Muir and reigning World No. 1 Shelby Houlihan will race against each together. Their only previous meeting was at the 2017 Pre Classic 1500, a race won by Kipyegon.

The field is so elite that the only 1500 world-rankers missing have opted for a challenging 3000 meters, and both races – not to mention the stellar steeplechase – will combine to make this year’s Pre Classic the best-ever one-day display of women’s distance racing in the U.S.

Laura Muir, 26, won her second Diamond League trophy last year and has yet to lose outdoors on the track in 2019, her talent extending beyond the 1500. In March, she repeated with double European Indoor golds in the 1500 and 3k.

She wasn’t anywhere near done. The former NCAA champ at Arizona State went back to her native Iowa and won U.S. titles at both 1500 and 5k, the first to do so in almost 20 years. Houlihan continued, setting an American 5k record in July at 14:34.85.

Her world No. 1 ranking last year by Track & Field News was the first by an American woman who also rated in the 5k in the same year. This year she added her first U.S. cross-country title in early February.

Faith Kipyegon, 25, is the ultimate championships performer, earning gold at the Rio Olympics and London Worlds – and ranking No. 1 in the world both years by T&FN.

Her Rio performance was one for the ages, covering the last two laps in a stunning 1:57.2. The Kenyan record holder set her best at the 2016 Pre Classic – 3:56.41 is still the fastest ever recorded on U.S. soil.

Ethiopia’s Axumawit Embaye, 24, world-ranked last year for the first time at No. 9. She earned silver at the 2014 World Indoors and just missed medaling in 2016, finishing 4th. Her outdoor racing has broken new ground, PRing twice in May, topped by a 4:00.17.

Australia’s Linden Hall, who will turn 28 the day before this year’s race, ran the fastest ever by anyone from Oceania in last year’s Pre Classic – 4:00.86. The previous PR for the three-time NCAA finalist from Florida State came in the 2016 Pre Classic.

Two 22-year-old Americans have plenty of Pre Classic experience, but for another 22-year-old this will be her first foray at the senior international level.

Dani Jones won last year’s Pre Classic National race in a PR 4:07.74, which she lowered two weeks later to 4:07.33 during a redshirt year at Colorado. The Arizona native won the NCAA cross-country title last fall and this year has PRed in her first two 5k track races. In 2015, she was a close runner-up in the Pre Classic high school mile.

Alexa Efraimson has raced four times in the Pre Classic National race, and her first in 2015 resulted in an American Junior record 4:03.39. This May, the Washington native ran her two fastest times since the AJR, topped by a 4:04.06.

Jessica Hull has never competed at a Prefontaine Classic, but she is very familiar with winning big races. The Australian won the NCAA 1500 for Oregon in 2018 and the indoor 3000 in 2019. She is undefeated in 12 races this year, indoors and out. So far this season, Hull has set a personal best in the indoor mile and 3k and the outdoor 5k. Her 1500 PB of 4:08.75 is next on the list.

Watch out for two super youngsters from Ethiopia.

Overall, the Prefontaine Classic 1500s have seen 10 different women break the 4:00 barrier on 15 occasions. So far.