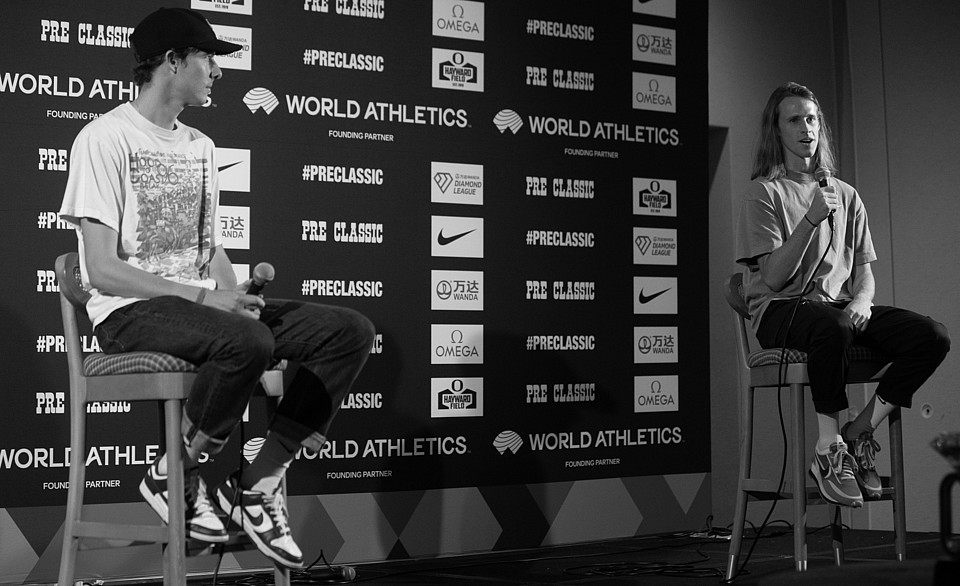 Training partners Cooper Teare (left) and Cole Hocker (right) talk about their transition from collegiate to professional running at the Pre Classic press conference on Friday. Photo by Logan Hannigan-Downs

For some, a Prefontaine Classic debut; for others, an annual appearance. Olympic gold medalists, Paralympians, and Eugene favorites will all set foot on the track at Hayward Field at the University of Oregon on Saturday.

Due to the weather forecast for Saturday, the discus, pole vault and high jump have been moved to the Friday portion of the Pre Classic. Reigning Olympic discus champion Valarie Allman will return to the ring at Hayward where she stood less than a year ago at the Olympic Trials before being crowned the Olympic champion. Mondo Duplantis—the current world record holder in the men’s pole vault—will also compete Friday night.

Two Jamaican sprint powerhouses are set to toe the start line on Saturday. Elaine Thompson-Herah, who is coming off a double-Olympic gold medal performance in Tokyo, will race the 100m, and her Jamaican teammate Shelly-Ann Fraser-Pryce—the Tokyo silver medalist—will line up in the 200 meters.

“You can start a family, you can come back from an injury,” Fraser-Pryce said. “Whatever it is, you have the power to do it.”

After making her Pre Classic debut in 2012, now 10 years later, steeplechaser Emma Coburn returns to Hayward for her seventh Pre Classic. This meet will be Coburn’s first 3,000-meter steeplechase of the 2022 season, and she hopes to return to Hayward for the World Championships later this summer.

“This feels like a home meet,” said Coburn, a Colorado native. “It just feels like the perfect way to kick off the year. Even though it’s the deepest field in the steeple and it’s so elite, it feels really calming and peaceful to kind of be back at a home track.”

Some familiar faces will line up for the women’s 800m on Saturday. Olympic silver medalist Keely Hodgkinson of Great Britain is scheduled to compete along with former Duck Raeyvn Rogers.

Cole Hocker and Cooper Teare join Rogers as University of Oregon alumni and are making their Pre Classic debut as professional athletes. Hocker and Teare will be joined by reigning Olympic 1500 meter champion Jakob Ingebrigtsen in the Bowerman Mile.

The two former Ducks haven’t had a whole lot change for them in the transition from collegiate athletes to professional athletes. Hocker and Teare still live in Eugene, train at Hayward, and run the same routes around town.

“It’s working,” Hocker said about staying in Eugene. “I think we both see that and how we’re able to progress with not just our own mental strength but also having that person to do every single rep with.”

Woodhall will join the field in the men’s 400 meters T62. This is the first Pre Classic that will include Paralympic events in 33 years. The women’s 100m T63 will also take place on Saturday. Blake Leeper and Scout Bassett also have the opportunity to compete alongside the rest of the Pre Classic lineup.

“Each one of us has an amazing story because something out of the ordinary has had to happen in all of our lives for us to even be able to compete at the Paralympics,” Bassett said. “I’m always having to remind myself every time I step on the track that of course I want to do well, I want to win, but I compete for something so much bigger than just myself.”

Bassett spent the first seven years of her life in a Chinese orphanage. When she was a baby, Bassett was found abandoned on the street after losing her right leg in a chemical fire. Just before turning 8, Bassett was adopted and moved to a small town in Michigan.

Before coming to the states, Bassett had spent years inside looking out the windows at the playground but never getting to play like the other kids. Now, the Paralympic sprinter prepares for her first Pre Classic competition.

After attempting to qualify for the Olympic Trials last year, Leeper has had to make some adjustments to his training. For almost 10 years, Leeper stood 6-foot-2 on his running blades, but after running the Olympic Trials qualifying time in the 400 meters last summer, the governing bodies determined his blades gave him too much of an advantage.

This required Leeper to lose six inches, essentially forcing him to relearn how to run.

While Leeper still had the opportunity to compete in Tokyo at the Paralympic games last summer, he still wants to qualify legally for the U.S. Olympic Trials. Now, Leeper will be running in the men’s 400m at the Pre Classic on Saturday, but he will stand 5-foot-8 instead of 6-foot-2.