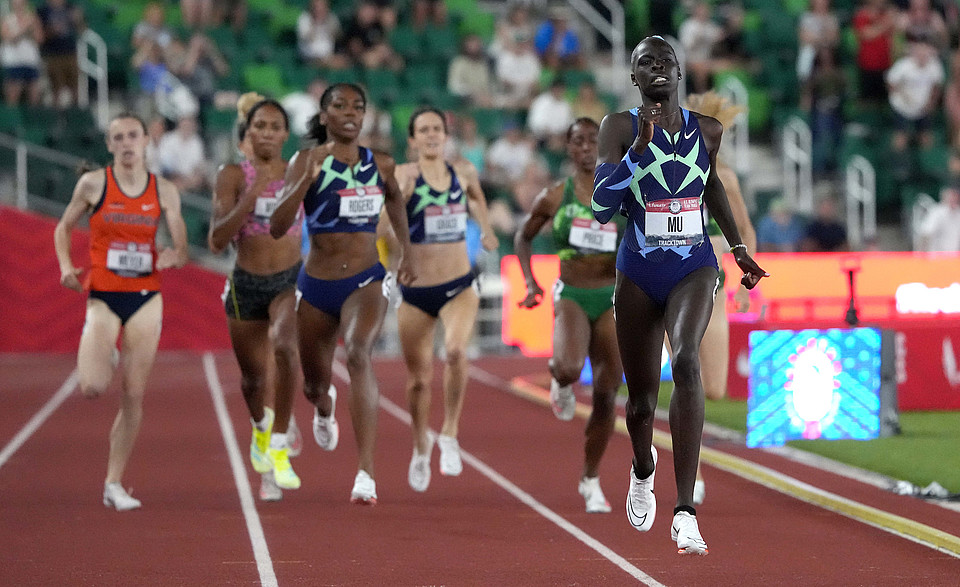 The Pre Classic 800 is packed with firepower as all three members of the powerful U.S. Olympic team are included. Two of those Americans are among the three medalists from the 2019 World Championships set to compete.

Eugene, Oregon – Athing Mu tops a stellar 800-meter field, a leading event for the Prefontaine Classic’s “Women’s Distance Night in Eugene” set for the opening Friday in its long-awaited return to Hayward Field at the University of Oregon.

Even as meet organizers eagerly await results of the upcoming Olympics to complete many fields, enough high-quality athletes have confirmed their entry in the 800 to make it one of the prime events on an evening that moves the spotlight solely onto women’s distance races.

The women’s theme of the day will be orchestrated in-stadium for the first time by a female voice – that of Katharine Merry, a Pre Classic mainstay as infield interviewer and herself a former Olympic medalist in the 400 meters. Her voice also provides the narrative of the preview presentation each year.

Friday’s portion of this year’s Pre Classic will be special in other ways. The re-imagined Hayward Field will receive a long-anticipated opening celebration with a nod to the countless past magic moments at historic Hayward Field, but also a focus to the future – on what track & field fans the world over have to look forward to for years to come, including next year’s World Athletics Championships Oregon22 and the 2023 Diamond League Final, which will be held in the U.S. for the first time.

Ticket purchasers for the main portion on Saturday will also find benefits, as reserved seats for Friday’s Distance Night are included with the combined ticket.

The Pre Classic 800 is packed with firepower as all three members of the powerful U.S. Olympic team are included. Two of those Americans are among the three medalists from the 2019 World Championships set to compete.

Teenage sensation Athing Mu leads the way, sporting the world’s fastest time this year at 1:56.07 in winning last month’s U.S. Olympic Team Trials. The 19-year-old from Trenton, N.J., is now the second-fastest American ever and owns American U20 records in both the 800 and 400 – the latter at 49.57 in winning the NCAA title for Texas A&M just two weeks earlier when she also split 48.84 in the 4x400. That’s the fastest split in collegiate relay history.

Raevyn Rogers, 24, is well known at Hayward Field and her image graces the new tower. She earned silver at the Doha Worlds with a homestretch finish that local fans compare to her sprint in anchoring the Oregon 4x400 with a 49.77 split that sealed the Ducks’ winning the first collegiate triple crown for women in 2017. The Houston native lowered her PR to 1:57.66 in the Olympic Trials last month, finishing second.

Kate Grace, 32, is a fourth American set to race. Winner of the 2016 Olympic Trials and a finalist in Rio, the Yale grad missed the team this year and has responded with a vengeance, clocking three straight PRs, the fastest at 1:57.20 and she now leads the Wanda Diamond League points standings.

Uganda’s Halimah Nakaayi, 26, was a surprise gold medalist at the 2019 Doha World Championships. Her 2021 season started modestly, but she has improved in all four races, the latest a PR 1:58.03, 0.01 faster than she ran in Doha for gold. This will be Nakaayi’s first race in the U.S.

Natoya Goule, 30, sits just one point behind Grace in the current Wanda Diamond League standings and has clocked two of her three fastest races ever this month. A multiple NCAA champ for both LSU and Clemson, the Jamaican record holder made her first major final in Doha, finishing 6th.

Tickets for the 46th annual edition of the Prefontaine Classic, to be held August 20-21 at Hayward Field in Eugene, Ore., are available at GoDucks.com. Purchase gains entry into both Friday night and Saturday sessions of the meet. All seats are reserved for both sessions.

Accreditation requests for bona fide members of the media wishing to cover the Prefontaine Classic can be placed online at portal.diamondleague.com. Media accreditation questions and other inquiries can be sent to media@preclassic.com.

The NIKE Prefontaine Classic will be shown live to an international audience by NBC on Saturday, and live-streamed on USATF.TV on Friday night.