Another Epic Merritt/James 400 Battle On Tap at Pre Classic 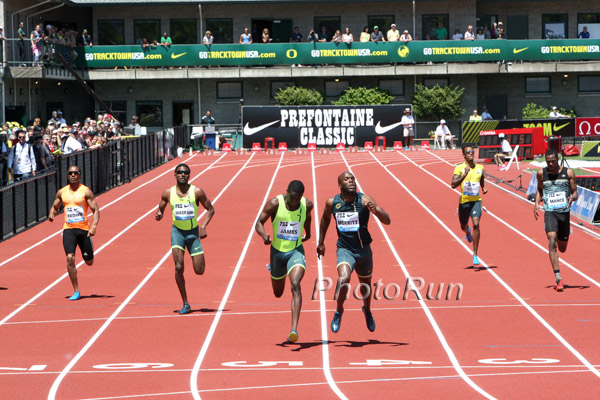 Without fail, every 400-meter race between LaShawn Merritt and Kirani James brings excitement, drama and/or a close finish. Especially at the Prefontaine Classic, where they will clash for a fourth time – more than at any other meet.

Another Epic Merritt/James 400 Battle On Tap at Pre Classic

Eugene, Oregon – Without fail, every 400-meter race between LaShawn Merritt and Kirani James brings excitement, drama and/or a close finish.  Especially at the Prefontaine Classic, where they will clash for a fourth time – more than at any other meet.

Kirani James owns the overall career head-to-head record at 8-5.  One of his wins was last year’s Pre Classic, which produced the most exciting finish in meet history, as James edged Merritt while both clocked 43.97.  That is the fastest same-time finish anywhere and just off Michael Johnson’s meet record of 43.92.

James won their first matchup as an 18-year-old at the 2011 World Championships, defeating the then-reigning Olympic and World Championships gold medalist Merritt in a stirring homestretch battle.  Merritt held the lead for most of the race until James passed him near the end.  The victory (by just 0.03 seconds) made James a national hero in his native Grenada.  A year later in London, James became the tiny island’s first Olympic gold medalist in any event.

LaShawn Merritt owns some incredible finishes of his own in this matchup.  Four of his five victories over James have come at the World Championships (2013), Pre Classic (2012 & 2013) and IAAF Diamond League final (2013).  His 2013 Pre Classic win over James was by just 0.07 seconds .  Their first Pre Classic meeting was in 2012, when James ran under protest after a false start.  Though he was not given an official time, James crossed the line just about a tenth behind Merritt in the American’s first win in the series.

Merritt is among America’s all-time greatest 400-meter runners, as only Hall of Famer Michael Johnson has more major gold medals than Merritt’s three (2008 Olympics, 2009 & 2013 Worlds).  Yet Merritt’s four Pre Classic victories are twice as many as anyone else in this event.

While pre-race attention will logically gravitate to James and Merritt, an intriguing collection of world-class elite runners are also ready to line up.

Isaac Makwala owns every national record of Botswana from 100 to 400 meters, setting all of them last year.  But his two on July 6, 2014 set the world’s fastest-ever one-day double for 200 and 400 meters.  On that day in the Swiss mountain town of La Chaux-de-Fonds, Makwala began with an African record of 44.01 in the 400, then came back 90 minutes later to add a 19.96 in the 200, becoming just the third African to run sub-20.  He won his second straight African Championships 400 gold last year and was ranked No. 3 in the world by T&FN.

Abdalleleh Haroun of Qatar is only 18 years old and has yet to lose a recorded race.  His young career has started with a pair of 44.68s, including winning April’s Arab Championships.  At 18 years and 2 months, no one younger has ever run as fast as 44.68.  The world junior record is 43.87, and this will be Haroun’s first race on U.S. soil.

America’s Tony McQuay was part of a U.S. 1-2 at the 2013 World Championships, taking the silver behind Merritt.  He recorded the USA’s fastest splits in the last two major 4x400-meter relays, both earning medals (2012 Olympics silver, 2013 Worlds gold).  McQuay teamed with Merritt on the USA’s winning 4x400s at the World Relays this year and last, again recording the fastest split this year.

Pavel Maslak of the Czech Republic lowered his country’s national record to 44.79 last year.  Maslak is riding a nice wave in 2015, winning the European Indoors (matching his 2013 title) as part of an undefeated campaign.  He also won the 2014 World Indoor gold.