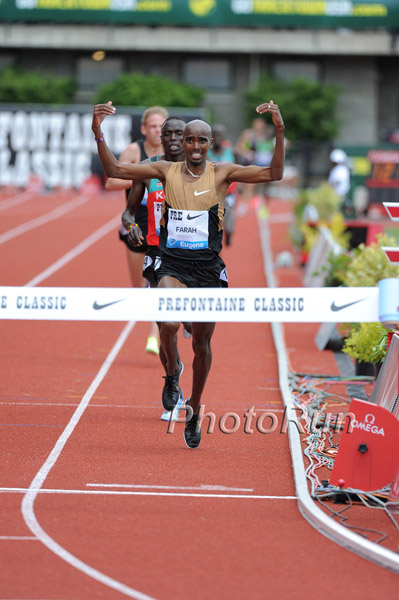 Mo Farah returns to the Prefontaine Classic 10,000 meters, where the Olympic gold medalist will be joined by another incredibly deep field.

Eugene, Oregon – Mo Farah returns to the Prefontaine Classic 10,000 meters, where the Olympic gold medalist will be joined by another incredibly deep field.

The Pre Classic’s 10k is once again a cornerstone of Distance Night in Eugene on Friday, May 29, where fans can enjoy world-class track & field performances for free, the fifth-straight year that title sponsor Nike has provided free admission to the thrilling first-day session.  Previous editions of the Pre Classic’s free Friday night program have included world-leading marks and American records, most recently last year’s 10k by Galen Rupp, who will be running the 5k this year, also during Distance Night.

Mo Farah of Great Britain has been the world’s dominant long-distance track runner since he won the 5000 gold and 10,000 silver at the 2011 World Championships. He followed that up by sweeping the 5k and 10k at both the 2012 Olympics and 2013 World Championships.  He has not lost a 10k race in nearly 4 years!

Farah made history in winning the 2011 edition of the Pre Classic.  His time of 26:46.57 was the fastest in the world since the 2008 Pre Classic.  In the 2011 Pre Classic, Farah was the first of a record nine runners to break 27 minutes in the same race – no other race in the world has had more than six.

A record seven runners enter this year’s Pre Classic with PRs under 27 minutes – and that does not include the reigning World Cross Country champion.

Of those sub-27 runners, only Kenya’s Paul Kipngetich Tanui has run that fast at two different Pre Classics – in 2011 as a 20-year-old for 4th behind Farah and again last year for 2nd behind Rupp.  Both times he set PRs, with last year’s 26:49.41 making him the fastest Kenyan in three years.  Tanui was ranked No. 2 in the world last year byTrack & Field News (behind Rupp).  He earned bronze at the 2013 World Championships, but his highest international placing is a silver at the 2011 World Cross Country Championships.

Josphat Kipkoech Bett of Kenya was ranked No. 3 in the world last year byT&FN after a summer that included the Kenyan national title, a silver at the Commonwealth Games, and a bronze at the African Championships.  He was runner-up in the 2013 Pre Classic (to legendary Ethiopian Kenenisa Bekele) and third in 2011.  He first came to prominence as the 2008 World Junior champion.

Kenya’s Emmanuel Kipkemei Bett is the highest-finishing returner from another famous Pre Classic 10k – in 2012, when Kenya’s 15 best were the only entrants, as the race served as the Kenyan Olympic 10k Trials. There were no pacers, no lapped runners, and no one dropped out in a fast, thrilling race.  Bett finished 4th, missing the Olympics by 2 seconds.  Later that summer, he ran his PR 26:51.16, the world’s fastest that year.

Geoffrey Kamworor of Kenya is not only the reigning World Cross Country champion, but also the World Half-Marathon champion.  He won the Junior title at the 2011 World Cross Country Championships and was Kenyan champion in the 5k in 2012, making the Olympic squad.  Kamworor was only 18 when he ran his first 10k, a still-standing PR of 27:06.35 from the record-setting 2011 Pre Classic.  His half-marathon best of 58:54 makes him history’s 8th fastest, and he owns a marathon best of 2:06:12.

Kenneth Kiprop Kipkemoi is a former Kenyan champion and African Championships gold medalist in the 10k, both in 2012.  Like Emmanuel Bett, he was unable to make the Olympic team but finished the 2012 season with a fast PR at 26:52.65.  A finalist in the 2013 World Championships 10k, he was the world’s 2nd-fastest half-marathoner last year at 59:01.

As close as Emmanuel Bett was to making Kenya’s 2012 Olympic team,Geoffrey Kirui was just another half-second behind in 5th.  He was only 19 and would finish the summer with a World Junior Championships bronze and 2nd-fastest Junior time in world history at 26:55.73.

Titus Kipjumba Mbishei of Kenya was silver medalist at the 2008 World Junior Championships and 2009 World Junior cross country championships.  His PR of 26:59.81 is the 7th-fastest in the field, and his 5k best of 13:00.04 is behind only Farah and Tanui in this 10k field.

North America’s best in the field is Canadian Cameron Levins, a double Olympic finalist in 2012.  That was the same year Levins won a 5k/10k NCAA double for Southern Utah, matching the most recent such doubler – Galen Rupp, now a training partner of Levins.  This winter, Levins pulled off an unbelievable one-day mile/2-mile double of 3:54.74 and 8:15.38, winning both events indoors at the Armory Invitational in New York.

The U.S. has two entrants.  The fastest is Diego Estrada, who competed for Mexico in the 2012 Olympics.  A dual citizen, he won the U.S. Half-Marathon title in January in his debut at the distance.  Estrada was 3rd in the NCAA 5k for Northern Arizona in 2014.

The remainder of an extremely talented field: