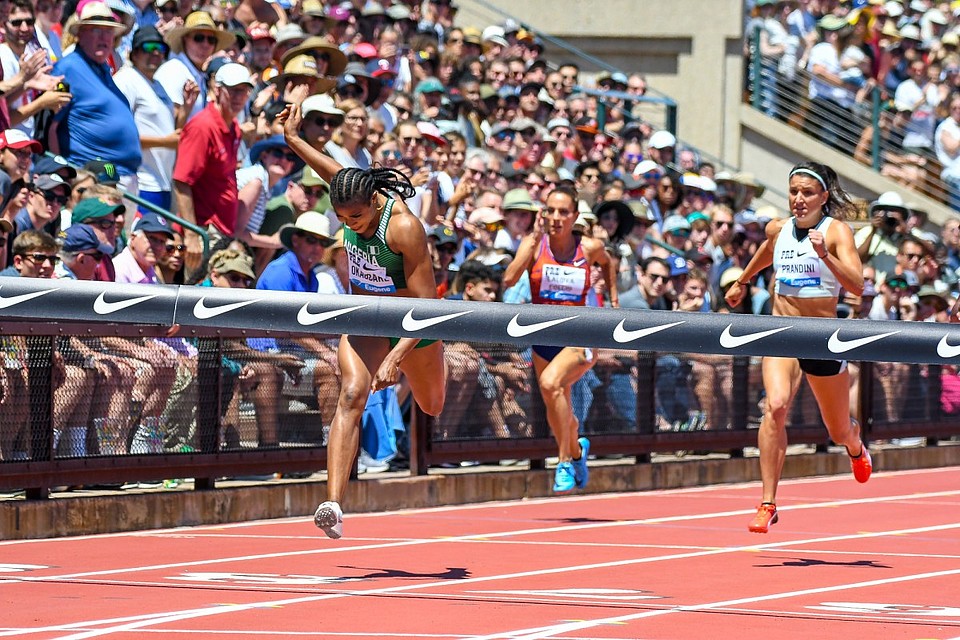 PALO ALTO, Calif. – The 2019 edition of the Prefontaine Classic will go into the history books for being the first time – and perhaps last – to be held anywhere but Hayward Field in Eugene.

But Sunday at Stanford, the California sun was a welcome newcomer to the meet, the expanded seating at Cobb Track and Angell Field were packed with a reported 8,128 people, and the Diamond League quality competition re-wrote the track’s record book in a matter of two hours.

But aside from the venue change, there were other moments that will be stitched into the fabric of the 45-year old meet.

Sifan Hassan of The Netherlands (and the Nike Oregon Project) ran one of the world’s greatest women’s 3,000-meter races, clocking 8:18.49.

Brazil’s Darlan Romani had the meet of his life in the shot put ring, piling 61 centimeters onto his personal best and breaking all-time South American and Diamond League records with his 74-2.50 (22.61) best mark.

Rai Benjamin got the meet revved up by mowing through the 400-meter hurdles field in 47.16 seconds for a new world-leading performance. Benjamin joined Edwin Moses as the only man to run that fast, or quicker, multiple times.

Caster Semenya, the South African who is fighting for her athletic life with the IAAF in court proceedings, continued to remain four or five steps ahead of every woman in the world in the 800 meters. The two-time Olympic champion ran away from a star-studded field to win in 1:55.70 – the fastest time ever on U.S. soil. Ajee' Wilson finished second in a season-best time of 1:58.36.

Christian Coleman re-set the fastest time of the year in the 100 meters, clocking 9.81 seconds on a day when the straightaway sprints generally did not produce jaw-dropping times. Behind him, 37-year-old Justin Gatlin showed he’s not going anywhere just yet, placing second in 9.87 seconds.

Benjamin, Coleman and Michael Norman, who won the 400 meters in 44.62 seconds, were the only U.S. competitors to win on a day dominated by international athletes.

Timothy Cheruiyot of Kenya led all 14 finishers under four minutes in the Bowerman Mile to conclude the met. Cheruiyot won handily in 3:50.49 and produced the fastest time in the world outside this year. Top American Craig Engels kicked to a strong fifth place with a personal-best time of 3:51.60.

The 2016 Olympic 1,500-meter gold medalist, Matthew Centrowitz, made his Pre Classic debut in a Bowerman Track Club kit, logging 3:52.26 after recovering from injury.

In the men’s 2-mle, Uganda’s Joseph Cheptegei, the world cross country champion, outsprinted Paul Chelimo of the U.S. to win in 8:07.54 to 8:07.59. Cheptegei said he plans to try and win the 10,000 meters at the upcoming IAAF World Championships in October.

Beatrice Chepkoech of Kenya showed unbeatable form in the women’s 3,000-meter steeplechase as she drove under nine minutes for a dominant win in 8:55.58 for a new Pre Classic record. Chepkoech pushed it from the start, gunning through the first 1,000 meters in 2:55.07 on her way to the fifth-fastest all-time performance, giving her six of the top 12 marks in the event in history.

Emma Coburn, the world champion, aimed to push herself to a fast early pace as well so that she could test her fitness. She opened with 2:56.59, faster than she ever had run the first third of the race, she said, and suffered a minor fall with two laps to go on the way to a second-place finish in 9:04.90.

Allie Ostrander of Boise State, the three-time NCAA steeplechase champion, got her first taste of global elite caliber racing and ran a personal-best 9:31.44 for 13th place.

Orlando Ortega of Spain was a surprise winner of the men’s 110-meter hurdles, running 13.24 seconds to beat a strong field that included Olympic champion Omar McLeod, who was third.

In the women’s sprints, it was the Africans who shined bright. Marie-Josee Ta Lou of Ivory Coast won the 100 meters in 11.02 seconds, just ahead of Aleia Hobbs (11.04). First-time pros Teahna Daniels (11.13) and Sha’Carri Richardson (11.15) finished third and fourth.

In the women’s 200, Blessing Okagbare of Nigeria stole the thunder from the headliners in lane 7 and won the race in 22.05 seconds. Jamaica’s Elaine Thompson was a disappointed second in 22.21.

In the women’s high jump, Mariya Lasitkene showed the crowd why she is the greatest in the world at her event. She went two bars higher than anyone else, clearing 6-7.50 (2.02m) and 6-8.25 (2.04m) both on her first attempts before her first misses at the competition at 6-9.75 (2.08m), which would have been a centimeter away from the world record. As it was, Lasitkene broke the Pre Classic record.

Vashti Cunningham, the reigning U.S. indoor and outdoor champion, had a productive day as she cleared 2 meters for the first time in her career. She finished second at 6-6.75 based on fewer misses than Yaroslava Mahuchikh of Ukraine.