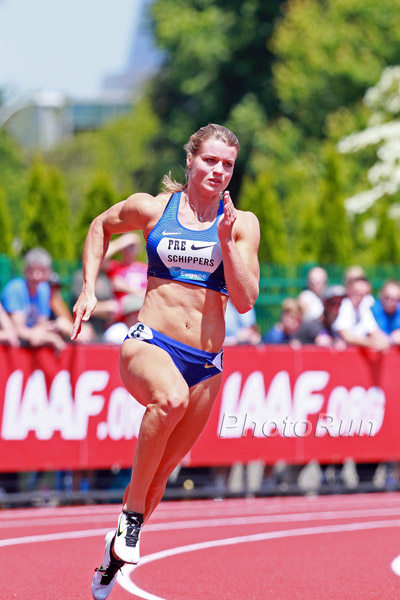 The women's 200 meters at the Prefontaine Classic is every sprint fan's dream. All three Olympic medalists from Rio are returning to Pre, where the eventual Olympic trio met for the first time last year in a race that was even tighter than the Rio final.

(The 43rd Prefontaine Classic, a member of the IAAF Diamond League of elite international track & field meets, will be held May 26-27, 2017 at historic Hayward Field.)

Eugene, Oregon – The women's 200 meters at the Prefontaine Classic is every  sprint fan's dream.

All three Olympic medalists from Rio are returning to Pre, where the eventual Olympic trio met for the first time last year in a race that was even tighter than the Rio final.

Incredibly, added to that trio is the woman who has won more Olympic gold than any other American besides Carl Lewis. Allyson Felix returns to the historic oval where she burned the fastest time ever seen in this event on U.S. soil.

It will be the first-ever meeting of all four superstars in any event.

Jamaican Elaine Thompson, 24, is the only woman since Florence Griffith Joyner in 1988 to win Olympic gold in the 100 and 200 meters in the same year, claiming both in Rio last summer.  With a 200-meter best of 21.66, she is just .02 off Jamaica’s national record set by legendary Merlene Ottey.  In the 100, she is co-holder with Shelly-Ann Fraser-Pryce of the Jamaican record at 10.70, winning last year’s loaded Jamaican national championships.

Thompson has started 2017 well with a wind-aided 10.75 100 meters this month in Kingston.  Indoors she ran a PR 6.98 in the 60 meters – the only sub-7 performance by a Jamaican besides those of Ottey and Fraser-Pryce.

Schippers owns the world’s fastest times already this year at 10.95 in the 100 and 22.29 in 200, both achieved two weeks ago in southern California.  In late-March, she had memorable anchors on multi-national relay teams, especially a speechless 4 x 200-meter anchor that caught Oregon star Ariana Washington at the tape by just .01.

Tori Bowie, 26, has won the last two Pre Classic races at this distance, including last year’s first-ever matchup of eventual Rio’s Olympic medalists.  She earned her first Olympic medal with a silver in the Rio 100, and her bronze in the 200 four days later confirmed her position as the only American medalist in either sprint.  She anchored the U.S. 4 x 100-meter team to a fabulous gold, running the second-fastest time in history despite being in lane 1.

Bowie has impressive history in lane 1.  In 2014, she sped a world-leading 22.18 to win the Pre Classic from the inside lane.  That meet also featured her last long jump – an event where she owned a best of 22-9¾ (6.95).  After that, she turned full-tilt to the sprints, beginning an incredible run as the top-ranked American 100 sprinter every year since, as selected by Track & Field News.

Her 2017 season shows promise, topped by a wind-aided 10.80 in mid-April, the second-fastest in the world under any conditions this year behind Thompson’s 10.75w.

No one has run faster in the U.S. since Allyson Felix blistered a 21.69 at Hayward Field to win the 2012 U.S. Olympic Trials, still the fastest on American soil.  The four-time Olympian's long list of achievements can only be compared to other legends.

At the 2012 London Games she became the first women’s triple gold medalist since Florence Griffith Joyner in 1988, winning her first individual gold in her signature 200.  Only a breathtaking finish by Bahamian Shaunae Miller prevented Felix from a Rio 400 gold.  With her silver, Felix now has the most Olympic medals by a woman with nine, along with Merlene Ottey.  Including men, only Carl Lewis (10) has more Olympic medals in current events among Americans.  She has ranked No. 1 (10 times) or No. 2 (3) among Americans since she was an 18-year-old in 2003.

Felix has already shown prime form this year, clocking a 49.9 relay leg at the Mt. SAC Relays earlier this month.

Jenna Prandini, 24, edged Felix in a frantic finish for the final spot on the U.S. team last year at Hayward Field.  It was among Prandini’s rare returns to Hayward Field since winning the 2015 U.S. title in her PR 22.20.  This will be a homecoming to the track where she won three individual NCAA titles in the long jump and 100 for Oregon.  Since leaving Oregon, she has been world ranked twice, both at No. 9 in the 200 by T&FN.

Marie-Josée Ta Lou, 28, came as close as possible to an Olympic medal last year, running a national record 10.86 in Rio, just an eyelash behind the bronze of Fraser-Pryce with the same time.  She repeated as a 4th-placer in the 200 at 22.21 for Cote d’Ivoire.  Both of her 4th-places are the best ever by a woman from her country.  Her only previous race in the U.S. was a 7th in last year’s World Indoor Championships 60 in Portland.

Ivet Lalova-Collio, 33 on May 18, is a four-time Olympian from Bulgaria who won silver medals in the 100 and 200 in last year’s European Championships.

Tickets for the 43rd annual edition of the Prefontaine Classic, to be held May 26-27 at Hayward Field in Eugene, Ore., are available now at www.GoDucks.com as well as from 1-800-WEBFOOT.  Sponsored by NIKE continuously since 1984, the Prefontaine Classic will be shown live to an international audience by NBC.

The Prefontaine Classic is the longest-running outdoor invitational track & field meet in America and is part of the elite IAAF Diamond League of meets held worldwide annually.  The Pre Classic’s results score has rated No. 1 or No. 2 in the world in each of the last six years by All-Athletics.com, the official data partner of the Diamond League.