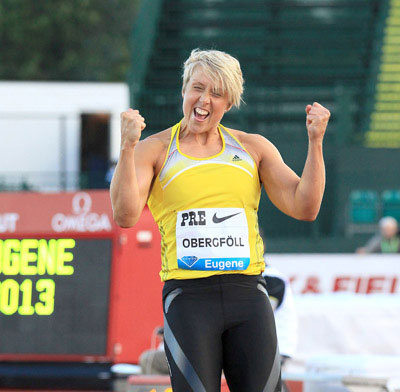 Gold medals are back in focus for the world’s best women’s javelin throwers at the Prefontaine Classic. Two of the best have very young fans.

Eugene, Oregon – Gold medals are back in focus for the world’s best women’s javelin throwers at the Prefontaine Classic.  Two of the best have very young fans.
The 41st Pre Classic, a member of the IAAF Diamond League of elite international track & field meets, will be held May 29-30 at the historic Hayward Field.

Barbora Spotakova and Christina Obergfoll headline a deep world-class field on the road for gold at the Beijing World Championships later this summer.

This particular duo has a unique rivalry – either one or the other has earned the No. 1 Track & Field News world ranking every year from 2007 on, and they are the only winners of the IAAF Diamond Trophy in this event.  And each missed one of the last two seasons while on maternity leave.

Russia’s Mariya Abakumova is another major gold medalist in the field, winning at the 2011 Daegu World Championships – which is the last time someone other than Spotakova or Obergfoll has won a major gold in this event.  Her best of 236-2 (71.99) is second all-time only to Spotakova’s world record.  Abakumova is also returning from maternity leave, giving birth to twin daughters in May 2014.  Olympic silver medalist in 2008, Abakumova also has bronze medals from the 2013 and 2009 Worlds.

Linda Stahl of Germany claimed her most famous gold medal in 2010, winning the European Championships ahead of Obergfoll and Spotakova.  Stahl was Olympic bronze medalist in London, just ahead of South African Sunette Viljoen,  who is also in the field.  Viljoen owns the U.S. all-comers best of 227-6 (69.35) and earned bronze in the 2011 World Championships.

Martina Ratej of the Slovak Republic earned the No. 2 world ranking last year by T&FN.  She will be joined by fellow Olympic finalist Madara Palameika of Latvia.