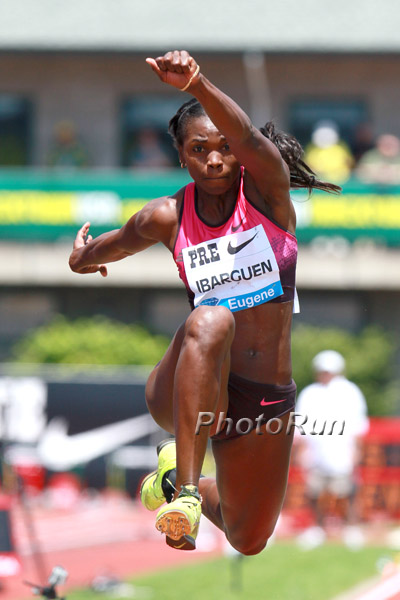 Caterine Ibarguen of Colombia is the reigning World Championships gold medalist.  In addition to winning the last two IAAF Diamond Trophies, Ibarguen was No. 1 in the last two year’s Track & Field News world rankings.  The most recent Pre Classic winner (2013) is a multi-talented athlete, high jumping jumped 6-4 (1.93) ten years ago and scoring a heptathlon total of 5742 in 2009.  Ibarguen has an early Diamond League lead by winning the Shanghai meet earlier this month. Most mpressively, she has the longest winning streak in the sport--23 straight--dating back to the last meet of 2012!

Russia’s Yekaterina Koneva won gold last year in the World Indoor Championships.  She was ranked No. 2 in the world the last two years by T&FN and is set for her first competition on U.S. soil.  Koneva won the European Indoor title in March and silver in last summer’s European Championships.

Olha Saladukha of Ukraine was No. 3 in the T&FN world rankings the last two years.  She was also No. 1 in 2011, the same year she earned gold at the World Championships and won the Pre Classic in a meet record of 49-1¾ (14.98) as part of season resulting in the IAAF Diamond Trophy.  The 2012 Olympic bronze medalist also claimed bronze at the 2013 World Championships.  She won her third consecutive European Championships title last year in Zurich.

Amanda Smock has won a U.S. title (indoors and/or outdoors) every year since 2011 for a combined total of seven championships.  She will be competing in her first Pre Classic.

China’s Yanmei Li, a 2012 Olympian, will be competing in the U.S. for the first time.  At 25, she is the youngest in the field and won the 2008 Asian Junior Championships.

Keila de Silva Costa of Brazil is a three-time Olympian whose best international finish is in the long jump – a bronze medal in the 2010 World Indoor Championships.

Yosiris Urrutia is a four-time Columbian long jump champion. Her best triple jump of 47-10 (14.58) is second only to Ibarguen in Columbia.