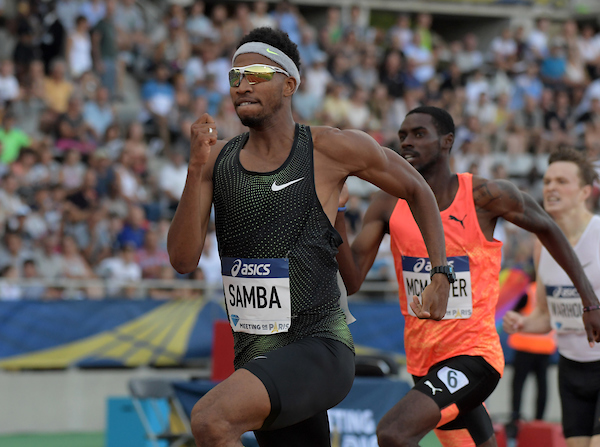 The Prefontaine Classic’s field is its best ever, including the Rio Olympic gold medalist and winners of the last three IAAF Diamond League titles.

Stanford, California – There hasn’t been this much excitement in the men’s 400-meter hurdles for more than 30 years.

The Prefontaine Classic’s field is its best ever, including the Rio Olympic gold medalist and winners of the last three IAAF Diamond League titles.

Still, fans of the event are focused on a matchup of two young stars who have taken the event to a level not seen since either Abderrahman Samba or Rai Benjamin were born. Not since the world records of legends Kevin Young and Edwin Moses has any single hurdler run as fast – let alone two in the same year.

The magic began last year in June, when Rai Benjamin ran 47.02 on a wet Eugene track to win the NCAA Championships and lower his best by almost a full second. Benjamin’s mark matched the fastest Moses ever ran – the last of the four world records for the two-time Olympic gold medalist – and is the fastest by anyone on U.S. soil.

Benjamin wasn’t even done that afternoon. In the NCAA’s final race, he produced a 43.6 second leg – the meet’s second-fastest ever split – to put his USC Trojans in front to stay en route to a 4x400 collegiate record 2:59.00. Earlier in the year, Benjamin was similarly dominating at the NCAA Indoor, splitting 44.35 (the meet’s fastest ever) in the 4x400 as USC recorded a world best 3:00.77. He was a finalist for The Bowerman Award as the nation’s top collegian. Last month he lowered his flat 400 best to 44.31.

Benjamin, 21, will compete this year officially as an American for the first time. He was born in New York and is a dual citizen with Antigua & Barbuda. Because of complicated international transfer rules, his representing the Caribbean country as a 15-year-old at the 2013 World Youth (U18)Championships held up his eligibility to represent the U.S. until late last year.

Three weeks after Benjamin’s stunner, Abderrahman Samba scorched the Paris track in 46.98, the fastest since Young’s 46.78 world record from the 1992 Barcelona Olympics. It was the pinnacle in Samba’s undefeated season in which he ran sub-48 in every final, including the four fastest in Diamond League history.
Amazingly, those achievements were in just the second year of Samba’s running the event. In his debut season he made the London World Championships final, finishing 7th.

Samba’s next World Championships are set for later this year on his home track in Doha, where the 23-year-old Qatari will be a major point of local interest. He scored his first Diamond League win there last year and last month opened up his 400-meter hurdle season with a dominating 47.51 time at the Asian Championships. The Pre Classic will be his first race on U.S. soil.

Winner of the last two Diamond League trophies was Kyron McMaster, 22, of the British Virgin Islands. As a freshman at Central Arizona College, he won the 2016 national JC indoor 400, then was a bronze medalist at the World Junior (U20) Championships in the 400 hurdles. In 2017 he ranked No. 2 in his Track & Field News world rankings debut. In 2018 he was No. 3, claiming the Diamond League’s second-fastest time ever behind Samba at 47.54.

Kerron Clement, 33, won the Rio Olympics and 2016 Diamond League title. His collection of international medals is by far the best in the field with golds in the 2007 and ’09 Worlds separated by Olympic silver in 2008, plus a bronze in the London World Championships. He has pure speed – he set the indoor 400 world record (formerly held by Michael Johnson) which lasted 13 years. He has also earned three major gold medals on the U.S. 4x400 team.

TJ Holmes, 23, was the top-ranked American by T&FN last year. A former NCAA runner-up for Florida, he was 5th in the London World Championships and earned bronze in the 2014 World Junior Championships.
Yasmani Copello, 32, has ranked among the world’s top 4 by T&FN in each of the last three years. The Cuban-born Turkish record holder earned silver at the London Worlds after a bronze in Rio.

Rasmus Magi, 27, is a former European silver medalist who set the Estonian record of 48.40 in the Rio Olympic final.

The final lane is still to be filled by the athlete running the best in the coming weeks.

Tickets for the 45thannual edition of the Prefontaine Classic, to be held June 30 at Cobb Track & Angell Field in Stanford, Calif., are available now by clicking here or at gostanford.com/tickets. Customers may select their exact seats using the pick-your-own map. Tickets can also be ordered over the phone by calling 1-800-STANFORD.

Steve Prefontaine is a legend in the sport of track & field and is the most inspirational distance runner in American history. He set a national high school 2-mile record (8:41.5) while at Marshfield High School in Coos Bay, Oregon, that is the fastest ever in a National Federation-sanctioned race. While competing for the University of Oregon, he won national cross country championships (3) and outdoor track 3-Mile/5000-meter championships (4), and never lost a collegiate track race at any distance. As a collegiate junior, he made the 1972 U.S. Olympic Team and nearly won an Olympic medal, finishing 4th in the 5K at the 1972 Munich Olympics, at age 21. After finishing college in 1973 and preparing for a return to the Olympics in 1976, he continued to improve, setting many American records.  His life ended tragically on May 30, 1975, the result of an auto accident, at age 24. The Pre Classic began that year and has been held every year since.