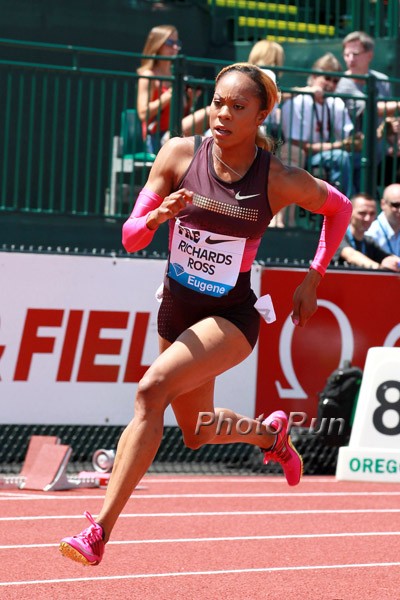 Sanya Richards-Ross and Allyson Felix. The two iconic superstars of the long-sprints will race each other as well as a field intent upon moving the spotlight onto themselves.

Eugene, Oregon – Sanya Richards-Ross and Allyson Felix. The two iconic superstars of the long-sprints will race each other as well as a field intent upon moving the spotlight onto themselves.

Sanya Richards-Ross is the American record holder and only American woman with two major gold medals in this event (2012 Olympics, 2009 Worlds).  She has won twice as many U.S. outdoor titles (6) as any other woman and has been ranked No. 1 in the world five times by Track & Field News – no other American has more than one.  Richards-Ross has won this event five times at the Pre Classic, the only athlete with more than two.

Jamaica’s Novlene Williams-Mills is not only the current IAAF Diamond Trophy winner, she is also the first from Jamaica to rank No. 1 in the world since 1970.  Williams-Mills is a warrior in another sense, having battled breast cancer in 2012.  She has won eight of the last nine Jamaican national titles and is the  reigning Pre Classic champion.

America’s Francena McCorory was ranked No. 2 in the world last year by T&FN, the highest by an American since 2012.  She won the World Indoor title last year and became the first to combine that with a sweep of U.S. indoor and outdoor crowns since Richards-Ross in 2012.  McCorory took the baton from Felix and handed it to Richards-Ross at the London Olympics in the 4x400 for gold.  She won her first national title at Hayward Field for Hampton in the 2010 NCAA Championships.

Natasha Hastings  is a consummate American relay runner, with only Richards-Ross and Felix having earned more than her four major medals.  But she is clearly legitimate in the solo race, too, coming in as the top American in the 2013 T&FN world rankings at No. 4.  Hastings is now a three-time U.S. champ, including the recent indoor 300-meter title in Boston.  She is a former World Junior and World Youth champion.

Jamaica’s Stephenie Ann McPherson, last year’s Commonwealth Games champion, was ranked No. 4 in the world by T&FN.  She was Jamaica’s best at the 2013 World Championships, taking 4th at 49.99 as the highest finisher for Jamaica.

Libania Grenot is the 2014 European champion.  She has won multiple national titles for two countries, her current Italy (3) and former Cuba (2).

Phyllis Francis is a two-time NCAA champ for Oregon.  The collegiate indoor holder, her most memorable moment yet came with a torching anchor to give Oregon victory in the 2014 NCAA Indoor 4x400.