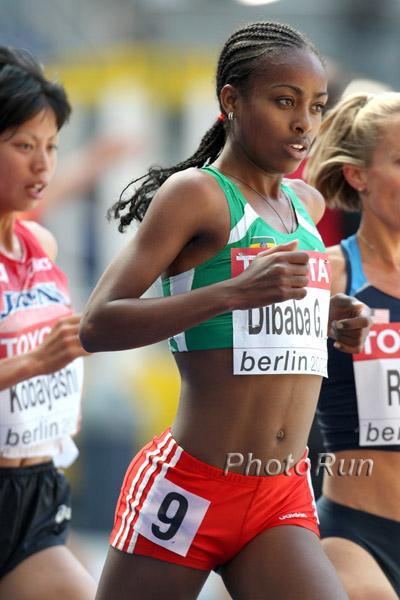 Gold medalists and world record holders will be lined up for a stellar women’s 5000 at the Prefontaine Classic.

Eugene, Oregon – Gold medalists and world record holders will be lined up for a stellar women’s 5000 at the Prefontaine Classic.            The 41st Pre Classic, a member of the IAAF Diamond League of elite international track & field meets, will be held May 29-30 at the historic Hayward Field.             Genzebe Dibaba owns four indoor world records, ranging from the 1500 (3:55.17) to the 5k (14:18.86).  She missed the road 5k WR in March by just 2 seconds on a windy day.  Now the 24-year-old Ethiopian is ready again to test the best on the outdoor track, where she ranked No. 1 in the world last year by Track & Field News.  A two-time World Indoor gold medalist (2012 1500, 2014 3k), she made her first headlines as a two-time World Junior cross-country champion (2008-09).  This will be Dibaba’s first appearance at the Prefontaine Classic.            Vivian Cheruiyot of Kenya is a 4-time World Champion returning from maternity leave after giving birth to her son in October 2013.  She is ready to step onto the world stage again.  The Kenyan record holder’s collection of gold medals includes a sweep of the 5k and 10k in the 2011 World Championships. She left London in 2012 as one of only two women with a pair of Olympic distance medals.  Cheruiyot is the most recent woman with a World Cross-Country title and a World or Olympic title, as she claimed the 2011 global harrier crown.  Her first glory was in cross-country, winning the World Junior title in 2000 – later that year she made her first Olympic team at age 16.  Cheruiyot has won twice in three races at the Pre Classic, in 2011 setting the meet and Hayward Field records of 14:33.96.  But no fewer than a half-dozen entrants have PRs superior to that.            Those two rivals are familiar with another running great, Tirunesh Dibaba – Genezebe’s big sister, who is taking the season off after giving birth to a son in March.   The younger sister would very much like to claim the Dibaba family record of 14:11.15 from Tirunesh, a mark which by-the-way is the current World Record!             As strong as Dibaba and Cheruiyot might be, there will be no shortage of talent challenging the big two.            Ethiopia’s Almaz Ayana was the only woman to beat Genzebe Dibaba last year at this distance, taking the African Championships title by almost 10 seconds.  A bronze medalist in the last World Championships, she ranked No. 2 in the world last year by T&FN.  She set a World Junior record in the steeplechase in 2010.            Kenya’s Viola Kibiwot was No. 3 last year in the T&FN world rankings.  She has made her country's last four World Championships teams, as well as the last two Olympic teams.  She is also an accomplished miler, ranking in the world’s top 10 in the 5k and 1500 in each of the last three years.  A former World Junior 1500 champ (2002), she also twice won gold in the World Junior Cross-Country (2001-02).            Hiwot Ayalew of Ethiopia is another No. 1-ranked runner.  Her specialty is the steeplechase, where she topped last year’s T&FN world rankings and is her country’s second fastest ever.  In 2013, she earned silver at the World Cross-Country Championships.            Molly Huddle is a two-time American record setter, clocking 14:42.64 last summer.  That’s almost a minute faster than her still-standing American Junior record set while a freshman at Notre Dame in 2003.  Her range of talent is still growing, having run 30:47.59 at 10k last year and winning the New York City Half-Marathon in March.            Sally Kipyego has trained for the last half-decade in Eugene.  During that time the Oregon Track Club Elite athlete has earned Olympic (2012) and World (2011) silver medals in the 10k. Prior to her move to the Pacific Northwest, Kipyego won eight NCAA titles in track and cross-country for Texas Tech.  She is Kenya’s second fastest ever at 5k and 10k.            Oregon grad Jordan Hasay will be another familiar face at Hayward Field.  She made the U.S. World Championships team at age 21 in 2013 and was a two-time NCAA Indoor champ in the mile and 3k while competing for Oregon. Other Americans in the field include USA 10K champion Kim Conley, 2015 USA Cross Country champion Laura Thweatt, and 2014 NCAA 5000 champion Marielle Hall.            Alemitu Haroye of Ethiopia is already familiar with Eugene – last August she won gold at Hayward in the World Junior Championships.  Still just 19, she finished 4thin the World Cross-Country Championships last month.            Janet Kisa of Kenya earned medals at last summer’s Commonwealth Games (silver) and African Championships (bronze).  Commonwealth Games 1500-meter champion Faith Kipyegon of Kenya will make her debut at the 5000-meter distance. Meraf Bahta of Sweden won the European Championships 5k last year. Three-time Olympic/World Championships finalist Sentayehu Ejigu of Ethiopia is making a successful comeback after two years of injuries.  Mimi Belete of Bahrain was gold medalist at the 2010 Asian Games. And Yelena Korobkina of Russia won last month’s European Indoor 3k title.             In total, 7 of the top 10 5k runners in the world as ranked by Track & Field News are in the field, including Nos. 1, 2, 3, & 4.