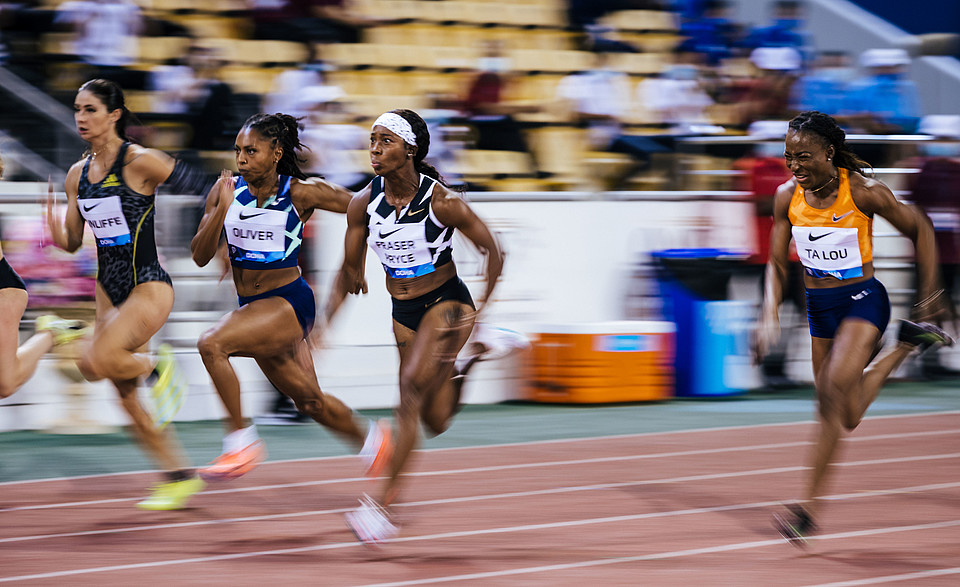 Meet organizers made true on their intent to find as many medalists as possible, securing all three Olympic medalists in the women’s 100 meters to face the U.S. champion who missed Tokyo.

Eugene, Oregon – We’ll never know what Sha’Carri Richardson would have done in the Tokyo Olympics, but the Prefontaine Classic has the next best thing.

Meet organizers made true on their intent to find as many medalists as possible, securing all three Olympic medalists in the women’s 100 meters to face the U.S. champion who missed Tokyo.

All 9 lanes will be filled at the re-imagined Hayward Field on the University of Oregon campus. All 9 entrants have sub-11 PRs, with all coming this year and an amazing 5 of them having run sub-10.8s.

Sha’Carri Richardson, 21, ran a wind-aided 10.64 in the semifinals at the Olympic Trials, noticeably easing up before the finish. Only Flo-Jo has run faster among Americans, and Richardson is close to her in the flair department as well. She first turned heads in 2019 with a 10.75 as she bettered world U20 (Junior)records in the 100 and 200 at the NCAA Championships for LSU. She improved to 10.72 this year.

Elaine Thompson-Herah, 29, completed a 100/200 Olympic gold medal double in Tokyo, matching her Rio performances to become the first woman to ever repeat such an accomplishment. She set Jamaican records in both, and her 10.61 in the 100 makes her No. 2 all-time behind Flo-Jo.

Shelly-Ann Fraser-Pryce, 34, claimed silver in Tokyo after lowering her Jamaican record to 10.63 prior to the Olympics. Fraser-Pryce was the last woman before Thompson to win two Olympic golds in this event (2008 and 2012). No woman or man has as many World Championships golds in the 100 (four).

Shericka Jackson, 27, completed a Jamaican sweep of the medals in Tokyo, but as the year started she seemed unlikely to do so with a PR of just 11.13 and better known in the 400 as a bronze medalist in Rio. She is now No. 5 Jamaican ever at 10.76.

Marie-Josee Ta Lou, 32, was the first non-Jamaican in Tokyo in 4th place, matching her finish from Rio. Co-holder of the African record at 10.78, she is the two-time defending Pre Classic champ.

Mujinga Kambundji, 29, was next of the entrants in the Tokyo final, finishing 6th for her best in any major meet in this event. She lost her Swiss record in Tokyo but has a career total of 25 national titles in all events.

Teahna Daniels, 24, was the top American in the Olympics as well as in the 2019 Doha World Championships, finishing 7th each time. A former NCAA indoor 60 champ for Texas, she lowered her PR to 10.98 in the Tokyo semifinals and ran a wind-aided 10.84 in the Olympic Trials semis.

Briana Williams is youngest in the field at 19 and will be making her debut in a Wanda Diamond League meet. The American-born Jamaican was the youngest-ever to win the 100 and 200 in the World U20 Championships in 2018 when she was 16. She missed the Olympics as the 4th-place finisher in Jamaican Championships and earned the leadoff spot on the 4x100 team that won gold in Tokyo. She’s still eligible for U20 records.