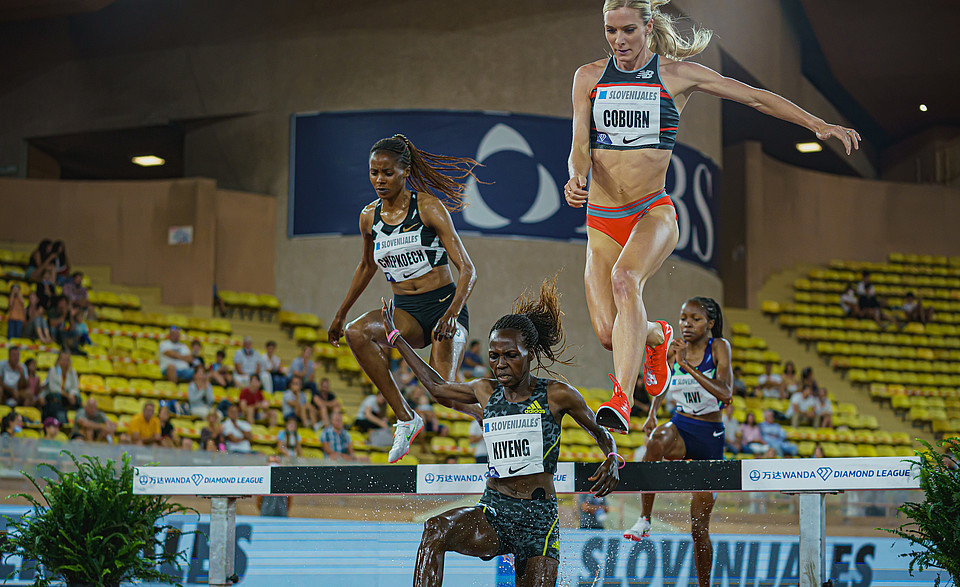 The world record holder will be matched with America’s two fastest in a race that always generates excitement – and fast times at the Pre Classic, which has produced the 10 fastest performances ever on U.S. soil.

Eugene, Oregon – How special will the women’s steeplechase be at the Prefontaine Classic?

The world record holder will be matched with America’s two fastest in a race that always generates excitement – and fast times at the Pre Classic, which has produced the 10 fastest performances ever on U.S. soil.

That’s just the icing for the latest event baking for the Pre Classic’s return to a re-imagined Hayward Field on the University of Oregon campus. The event is also special as the only one that’s produced a meet record each time it’s been contested and this will be the Pre Classic’s seventh women’s steeplechase.

The Kenyan great has an impressive collection of fast times, and her 7 sub-9:00 performances account for half of the world’s all-time total of 14. Among those is the fastest on U.S. soil at 8:55.58, winning the Pre Classic in 2019.

Emma Coburn, 30, dominates American steepling in many ways – she’s the only American major gold medalist (World Championships in 2017) and only Olympic medalist (bronze at Rio). The Colorado native earned a third Olympic berth (most by an American woman in the steeple) by winning a record ninth U.S. title at the Olympic Trials in late June.

Earlier this month Coburn appeared to be on pace to give the U.S. its first member of the exclusive sub-9 club, but she stumbled over the final waterjump in the Monaco Diamond League meet. She got up and still recorded a sub-9:10 time for the 13th time at 9:09.02.

Coburn has been the top American finisher in the Pre Classic steeple every time she’s run – that’s 5 of the 6 times it’s been held, and her first of three American records came in the 2016 Pre Classic.

The American record is actually held by another big threat, Courtney Frerichs, who will also be on hand. The 28-year-old soared to prominence in earning silver at the London World Championships and followed up in 2018 with her AR of 9:00.85, becoming just the second American since 2010 to beat Coburn in the process.

A Missouri native, Frerichs trains in Oregon and joined the Bowerman Track Club after winning the NCAA title in 2016 at Hayward Field for New Mexico. She earned a second Olympic berth last month at Hayward Field.

Two more American stars will return to Hayward Field, where they combined for a dramatic last lap for the final spot on the U.S. Olympic team.

Leah Falland, 28, was in prime position for a team spot before falling over a barrier with two laps to go. She got up and regained her third place by the bell lap, but the recovery sapped too much and she was passed by others. Less than 2 weeks later she PRed at 9:16.96, breaking her best set at the 2016 Pre Classic. Falland won the NCAA title in 2014 (and 2015 indoor mile) for Michigan State when she was known as O’Connor.

The final U.S. Olympic team spot was earned by Val Constien, a 24-year-old Colorado grad who trains with Coburn. Constien, whose pre-2021 PR was 9:44.51, was in fourth place when Falland fell, then fought off everyone for the coveted third place on the final lap of the Olympic Trials. Her time of 9:18.34 was her fourth PR of the year.

No one has run faster this year than the 9:00.67 posted by Norah Jeruto in winning the Doha Diamond League meet in May. The 25-year-old Kenyan won’t be at the Tokyo Olympics as she’s in transition to changing her allegiance to Kazakhstan, which is set to become final in January. Jeruto, often seen in results as Tanui, was runner-up in the 2018 Diamond League final in her PR of 8:59.62.

Winfred Mutile Yavi, 21, was born in Kenya but has represented Bahrain since she was 15. She made the World Championships final in 2017 and 2019, finishing 4th in Doha. Yavi has clocked her two fastest times this year, topped by a 9:02.64.

Celliphine Chepteek Chespol, 22, is looking to regain glory, some courtesy of Hayward Field. Her PR of 8:58.78 dates back to 2017, when she won the Pre Classic in a still-standing world U20 (Junior) record that still has her No. 3 on the all-time list for any age. She owns two golds from the World Junior Championships (2016 and 2018).

Hayward Field will be a welcome venue for Genevieve Gregson, the Australian record holder at 9:14.28. The oldest confirmed entrant, Gregson will turn 32 during her third Olympics in Tokyo, then follow with a first race at a site that has somehow eluded her. She was a runner-up in the NCAA Championships in 2012 for Florida as Genevieve LaCaze, and her name change came by marrying Ryan Gregson, winner of the Pre Classic’s first two editions of the International Mile in 2010 and 2011.

Mekides Abebe, 20, is the Ethiopian record holder at 9:02.52, set in May as runner-up in the Doha Diamond League meet. Her previous best was 9:25.66 when she finished 11th in the Doha World Championships as an 18-year-old.

Every distance race needs a pacer, and this one has an experienced steepler. Daisy Jepkemei, 25, is a Kenyan and like Jeruto will represent Kazakhstan next year. She was fourth in the 2019 Pre Classic steeple before lowering her PR to 9:06.66. She won gold as a 16-year-old at the 2012 World Junior Championships before earning bronze in 2014 when the meet was held at Hayward Field.

As with all events at the Pre Classic, additional stars are likely to be added pending results of the upcoming Tokyo Olympics.