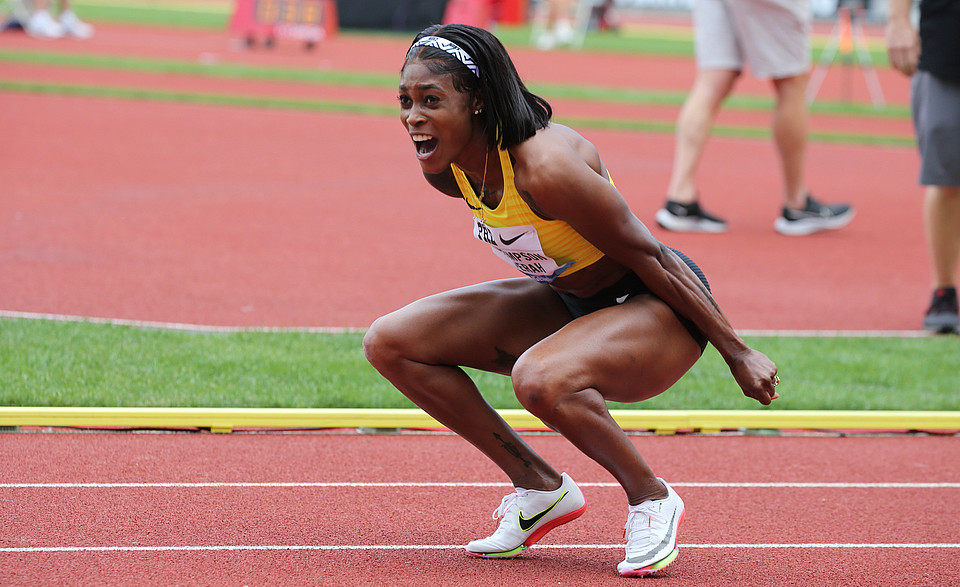 EUGENE, Oregon – The Prefontaine Classic was a record-smashing hit in its return home to the re-imagined Hayward Field on the University of Oregon campus.

The exuberant crowd at Hayward Field, which numbered 8,937 on Saturday, also witnessed a total of five performances which were the best ever recorded on U.S. soil. Seven of the meet’s performances took over the 2021 world lead.

The final race of the day was a mighty exclamation point, with 20-year-old Norwegian Jakob Ingebrigtsen continuing his uncanny success at the Pre Classic. The newly crowned Olympic champ followed Australia’s Stewart McSweyn’s hard pace after the pacers dropped off, then stormed the final lap to come home in 3:47.24 to win the famous Bowerman Mile with a Diamond League record and the fastest mile ever recorded on U.S. soil.

It was the first Pre Classic win for Ingebrigtsen, who is now 4 for 4 in setting lifetime bests at the Pre Classic (his first came in 2017 when as a 16-year-old he became the world’s youngest-ever sub-4 miler). McSweyn finished second in 3:48.40, just off the 3:48.37 that led the world until today. Kenya’s Timothy Cheruiyot, the silver medalist in Tokyo, was third in 3:51.17 as all 11 finishers ran sub-3:54.

One of the first races of the day was the highly anticipated matchup of U.S. champ Sha’Carri Richardson against the three Jamaicans who swept the medals in Tokyo. Elaine Thompson-Herah, the only triple gold medalist in track & field in Tokyo, responded with the race of her life, earning her nickname of “Fast Elaine” with a scintillating time of 10.54, merely the fastest outside of the world record 10.49 set by Florence Griffith Joyner in 1988.

The Jamaicans swept again as Shelly-Ann Fraser-Pryce (10.73) and Shericka Jackson (10.76) followed in their Tokyo positions. Richardson, behind near the midway point, shut down and finished ninth in 11.14.

Tokyo Olympic gold medalists, in fact, ruled the day, with few exceptions. Of the 13 individual medalists who lined up, 10 won here while two were second and one was seventh.

Another American record came in an exciting women’s steeplechase that saw multiple records. Norah Jeruto didn’t make the powerful Kenyan team but here raced away to a world-leading time of 8:53.65 in becoming No. 3 all-time. Courtney Frerichs, silver medalist in Tokyo, followed in becoming the first American to run sub-9 minutes at 8:57.77. Kenya’s Hyvin Kiyeng, bronze medalist in Tokyo, just missed her PR by 0.04 in 9:00.05 for third place.

Dominant as usual was Ryan Crouser in the shot put. Any of his six measured efforts would have easily won the competition as the two-time Olympic champ had a best of 23.15 (75-11½), a Diamond League record and the meet’s only DLR that wasn’t also a Hayward Field – because Crouser holds that with his world record 23.37 (76-8¼) from the U.S. Olympic Team Trials in June.

Noah Lyles ran a blistering curve and continued strong on the homestretch to win the men’s 200 meters in a world-leading 19.52, leading a 1-2-3 American sweep with Kenny Bednarek second in 19.80 and Josephus Lyles, the younger brother of Noah, third in a lifetime best of 20.03. The winning time was also a meet and Hayward Field record and just off Noah’s lifetime best of 19.50, which is No. 2 all-time U.S. behind only Michael Johnson.

Faith Kipyegon demonstrated exceptional talent in the women’s 1500, taking off by herself for a huge victory in a meet record 3:53.23 to win by over six seconds. It is the fourth time this year she has run sub-3:54, more than anyone else has done all-time. Australia’s Linden Hall (3:59.73) beat American Josette Norris (4:00.07) for second.

Olympic 200 gold medalist Andre De Grasse of Canada stepped down to the 100 and won a sterling race in 9.74. Although wind-aided by a 2.9mps breeze, it’s the fastest this year under any conditions. Americans Fred Kerley (9.78) and Ronnie Baker (9.82) were close behind.

In a battle of Olympic gold medalists, 5000 winner Joseph Cheptegei of Uganda defeated Ethiopia’s Selemon Barega (the 10k champ) in the 2-mile, 8:09.55 to 8:09.82. Barega just held off the USA’s Paul Chelimo, who was timed in 8:09.83 for third. Chelimo was the Tokyo 5k bronze medalist, while Tokyo 10k bronze medalist Jacob Kiplimo of Uganda was fourth in 8:10.16. The top seven finishers ran the year’s seven fastest times.

Dalilah Muhammad easily won the 400-meter hurdles. The American – a former world record holder and Rio Olympic gold medalist – ran a meet-record 52.77, more than a second ahead of Shamier Little of the USA (53.79) while Panama’s Gianna Woodruff was third (54.20).

A jumpoff at six heights decided the women’s high jump, with Iryna Gerashchenko of the Ukraine outlasting American Vashti Cunningham. Both had a day’s best of 1.98 (6-6), but the final order wasn’t decided until Grashchenko cleared 1.94 (6-4¼) a second time when Cunningham could not.

Canada’s Marco Arop was too much to handle in the men’s 800 meters. Just a semifinalist in the Tokyo Olympics, Arop built a big lead that neither the Tokyo gold medalist (Emmanuel Kipkurui Korir of Kenya) or silver medalist (Ferguson Cheruiyot Rotich) could make up. Arop won solidly in 1:44.51, while Rotch (1:45.02) edged Korir (1:45.05) for second.

American Katie Nageotte won the women’s pole vault at 4.82 (15-9¾), and just like in Tokyo she needed to come from behind at the winning height. Without her final-attempt clearance, victory would have gone to Great Britain’s Holly Bradshaw, who was ahead at the previous height of 4.72 (15-5¾). American Olivia Gruver was third at 4.52 (14-10).