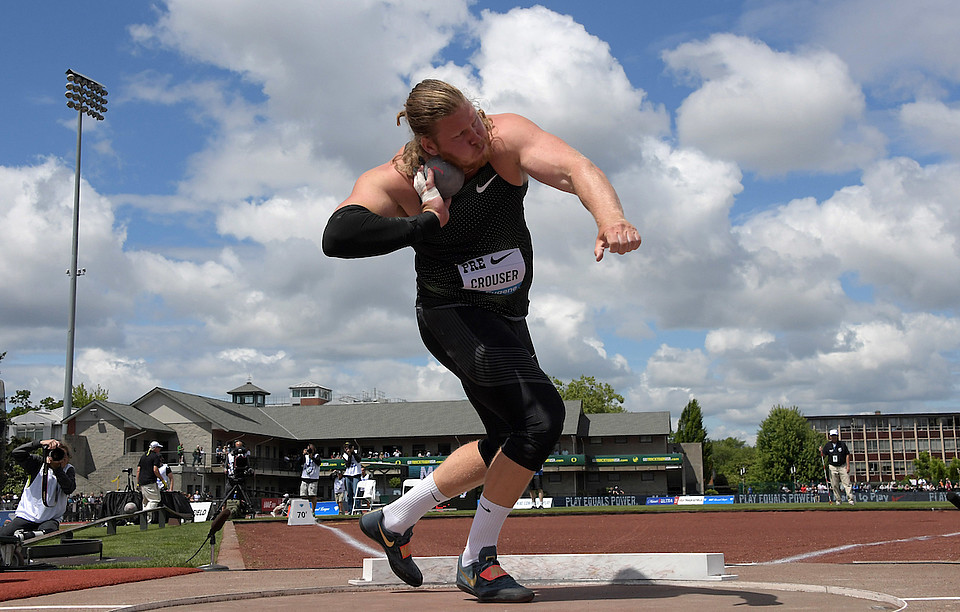 The world’s best shot put battle returns to the Prefontaine Classic as the clash for No. 1 continues between American Ryan Crouser and New Zealander Tom Walsh.

Stanford, California – The world’s best shot put battle returns to the Prefontaine Classic as the clash for No. 1 continues between American Ryan Crouser and New Zealander Tom Walsh.

It will be fourth time the Pre Classic will host the titanic matchup, one that began in 2016 with the very first meeting of the event’s current giants. Since then the two have won Olympic gold and World Championships golds indoors and out en route to dominating the world rankings each year produced by Track & Field News.
The duo will be surrounded by a power-packed field – eight of the Top 9 from T&FN’s 2018 world rankings – plus the only three putters to haven beaten both Crouser and Walsh in the same meet.

Ryan Crouser, 26, currently has a 12-9 lifetime head-to-head record over Walsh, though his first win will never be forgotten – taking Olympic gold in Rio. While the two have continued to duel all over the globe, Crouser’s two longest efforts against Walsh have come in setting Pre Classic meet records the last two years. His only loss to Walsh on U.S. soil was their first meeting at the 2016 Pre Classic.

The American swept the Millrose Games and U.S. Indoor titles in February with the two longest indoor meets of his career – his best of 73-3¼ (22.33) is still the absolute world leader.

His 74-4½ (22.67) PR last year equaled the world’s longest put since 2003 and he added another 74-footer (22.60) in winning last year’s Diamond League (matching his 2016 title) to become the first with two such meets in one year since world record holder Randy Barnes in 1990 – before Walsh or Crouser was even born.
Earlier this month Walsh added the Australian national title at 71-10¾ (21.91) – the world’s outdoor best thus far.He skipped the indoor season after winning his second World Indoor gold in 2018. He is the reigning world champion outdoors.

Darlan Romani, 28, made his first entry in the T&FN world rankings last year at No. 3. A 2016 Olympic finalist in his native Brazil, he saved his best for last September. At the Continental Cup in Ostrava he defeated both Walsh and Crouser – a feat not seen in over a year. Romani was 3rd in last year’s loaded Pre Classic with a PR that lasted until his national championships in mid-September when he joined the 22-meter club at 72-2¼. This year he has reached 71-7½ (21.83), best outdoors behind Walsh.

American Darrell Hill, 25, is the reigning U.S. outdoor champ with a world No. 4 ranking last year by T&FN. In 2017, he snatched the Diamond League title away from Crouser with a 5th-to-1st PR of 73-7½ (22.44). The nearly 2-foot improvement reminded fans of another Hill achievement – at the 2016 U.S. Olympic Trials when he improved over 1½ feet with his first 70-foot effort to make the U.S. team.

Hill’s 2017 Diamond League title made him just the just the second man to beat Crouser and Walsh in the same meet. In last year’s DL final, he finished runner-up with the 2nd-best effort of his career at 73-6 (22.40).

Joe Kovacs, who will turn 30 on June 28, joins Crouser and Walsh as the world’s only other 74-footers since 2003 and is the only man along with Walsh since 1990 with more than one such effort. After winning gold at the 2015 Worlds in Beijing, he earned silver in the Rio Olympics as well as the 2017 World Championships. The 2015 Diamond League winner won the Pre Classic in 2015 and ’16, the latter making him the first to beat Crouser and Walsh in the same meet. His runner-up finish in February’s U.S. Indoor matched his best nationals finish since 2017 outdoors.

Tomas Stanek, who will turn 28 on June 13, earned Euro Indoor bronze in March behind Haratyk and Storl. He is the Czech Republic record holder at 72-9 (22.17) and was the World Indoor bronze medalist last year.

The youngest in the field is Poland’s Konrad Bukowiecki, 22, already a three-time T&FN world Top 10 ranker. The 2017 European Indoor winner didn’t make this year’s final but followed up with training in New Zealand, becoming the first foreigner to beat Walsh on Kiwi soil since Crouser in 2017.

Tickets for the 45th annual edition of the Prefontaine Classic, to be held June 30 at Cobb Track & Angell Field in Stanford, Calif., are available now by clicking here or at gostanford.com/tickets. Tickets can also be ordered by calling 1-800-STANFORD.