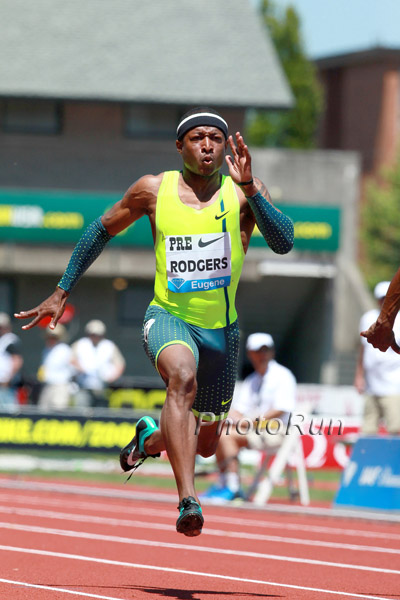 After setting an American record in the 4 x 100 earlier this month, all of team USA will compete individually at the Prefontaine Classic. As previously announced, second-leg star Justin Gatlin will be headlining the 200 meters; the other three will be featured in the 100.

Eugene, Oregon – After setting an American record in the 4 x 100 earlier this month, all of team USA will compete individually at the Prefontaine Classic.  As previously announced, second-leg star Justin Gatlin will be headlining the 200 meters; the other three will be featured in the 100.

Mike Rodgers led off the equal-fastest American 4x100 team in history to win the World Relays earlier this month in 37.38.  Individually, Rodgers ranked No. 2 in the world in last year’s Track & Field News world rankings, his sixth-straight year among the Top 10.  That streak is the longest by an American since Hall of Famer Maurice Greene (1997-2004).

Oregon native Ryan Bailey was anchor on the American record-setting team, crossing the line ahead of one Usain Bolt.  He was 4th in the 2012 Olympics.  With a best of 9.88, Bailey is among America’s fastest ever, just on the heels of world record holders Carl Lewis (9.86) and Leroy Burrell (9.85) as well as American record holders Greene and Tyson Gay.

Nesta Carter is the only man from Jamaica to rank among the T&FN  world top 10 in each year this decade in this event, topped by a No. 2 in 2013.  Carter has led off the Jamaican gold-medal 4x100 teams in the last two Olympics as well as the last two World Championships.  The 2012 Olympic team set the world record at 36.84.

Richard Thompson is Trinidad’s fastest ever at 9.82 and has been his country’s fastest since running 9.85 in 2011  The former NCAA champion from LSU in 2008 finished that summer with an Olympic silver medal.

James Dasaolu won the European Championships last summer.  With a best of 9.91, he is Great Britain’s fastest since Linford Christie (9.87), the 1992 Olympic gold medalist.  The Pre Classic will be Dasaolu’s first race on U.S. soil.

China’s Bingtian Su will also be racing for the first time in the U.S.  A four-time Chinese champion, he has already equaled his PR of 10.06.  He won the Asian Championships in 2011 and 2013.  The Chinese national record is 10.00.