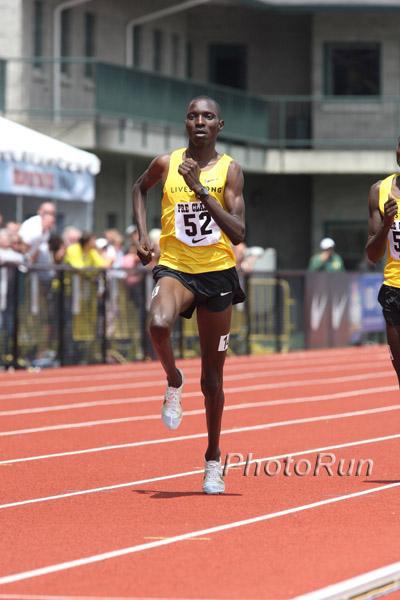 Like clockwork, the Bowerman Mile is putting up sub-3:50 miles at a record pace. The Prefontaine Classic’s signature event now has produced such barrier-breaking times for the sixth consecutive year – a streak longer than any other meet in the world.

Eugene, Oregon – Like clockwork, the Bowerman Mile is putting up sub-3:50 miles at a record pace.  The Prefontaine Classic’s signature event now has produced such barrier-breaking times for the sixth consecutive year – a streak longer than any other meet in the world.

This year’s field could be the best ever, as eight enter with sub-3:50 PRs, including all six of the record-tying group who broke that barrier in last year’s Bowerman Mile.  Since the birth of the IAAF Diamond League in 2010, the Pre Classic has taken worldwide ownership of the men’s mile, now with more than twice as many sub-3:50 miles (16) as any other meet (next most has 6).

Kenyan rivals Silas Kiplagat and Asbel Kiprop are set to duel again for the fifth straight Bowerman Mile.  One or the other has been ranked No. 1 in the world by Track & Field News each year since 2009 – Kiprop with four and Kiplagat with two, including the most recent.  The year before that streak began, Kiprop won the 2008 Olympic gold at Beijing.  Kiprop also has the most major golds of any Kenyan man in this event, adding the World Championships in 2011 and 2013 (Kiplagat earned silver in 2011).

Abdelaati Iguider is Morocco’s third-fastest miler in history, trailing only world record holder Hicham El Guerrouj and Said Aouita, former WR holder in the 1500 meters.  Iguider was the 2012 Olympic bronze medalist after earlier winning the World Indoor Championships.  He has a complete set of World Indoor 1500 medals, adding silver (2010) and bronze (2014).  He was fourth last year in the Bowerman Mile with a PR by almost three seconds at 3:49.09.

Aman Wote was third in last year’s epic Bowerman Mile, setting an Ethiopian record of 3:48.60.  He earned silver at last year’s World Indoor Championships 1500 and ranked No. 5 in the world last year by T&FN, a spot ahead of Iguider.

Americans Matthew Centrowitz and Leo Manzano are looking to make more history.  Centrowitz, a former NCAA champion for Oregon, is a two-time World Championships medalist, taking silver in 2013 after a bronze in 2011 – the only other two-time American medalist in the worlds in this event is American record holder Bernard Lagat (gold in 2007, bronze in 2009).

Manzano’s legacy is even more rare.  His silver in the London Olympics is the best since Jim Ryun in 1968.  Manzano was a four-time indoor/outdoor NCAA champion while at Texas. At last year's Pre, Manzano was the victor in the International Mile, winning in event-record time (3:52.41).

Ronald Kwemoi of Kenya is the only runner in the field who has yet to run a mile race.  Last year as an 18-year-old, he ranked No. 4 in the world by T&FN and obliterated a 12-year-old World Junior record with 3:28.81 in the 1500 meters, which is the equivalent to well under 3:50.  He is also the reigning Kenyan champion and last summer earned bronze in the African Championships (behind Souleiman and Kiprop in a close finish) and silver in the Commonwealth Games (to Magut).  This will be his first race on U.S. soil.

Two others making their U.S. debuts are Homiyu Tesfaye of Germany and Kenya’s Vincent Kibet.  Tesfaye, born in Ethiopia, was a finalist  for Germany as a 19-year-old in the 2013 World Championships, taking fifth.  Earlier in 2013, Tesfaye won the German national title at 10,000 meters.  Kibet ranked No. 9 in the world last year byT&FN as the fifth Kenyan – the fifth straight year Kenya has had at least half of Top 10 spots in this event.

Johan Cronje is the only South African to earn a major medal in the men’s 1500 meters, claiming the bronze at the 2013 World Championships.  He is a seven-time South African champion in the 1500 and owns national records at both 1500 and the mile.

Bethwell Birgen of Kenya is the fastest non-sub-3:50 miler in the field at 3:50.42.  He has twice ranked among the world’s Top 10 by T&FN.  Birgen made Kenya’s powerful team for 2013 World Championships, reaching the semifinals.  He was top finishing Kenyan at last year’s World Indoors, taking 8th.

Henrik Ingebrigtsen is the Norwegian record holder at both 1500 and the mile.  He added a pair of national records indoors at the European Indoor Championships in March by taking bronze in the 3000 a day before a sixth in the 1500.  Ingebrigtsen was 2012 European Championships gold medalist before claiming the silver last year.  He was a finalist at the 2012 Olympics (5th) and 2013 World Championships (8th), recording the best-ever finishes by a Norwegian at both majors.

For a complete listing of all sub-4 minute miles run at the Prefontaine Classic, go to www.preclassic.com.