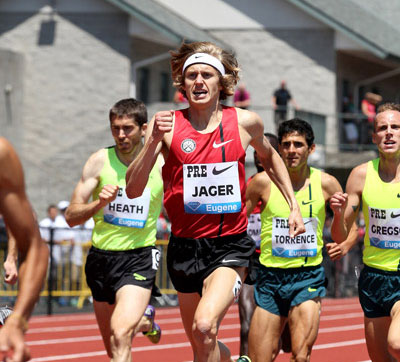 Every fan loves a winning hand, and that's what the Prefontaine Classic is dealing in the men's Steeplechase--the best in the world in a field that includes the gold, silver, and bronze medalists from the most recent Olympics Games and World Championships.

Eugene, Oregon – Every fan loves a winning hand, and that's what the Prefontaine Classic is dealing in the men's Steeplechase--the best in the world in a field that includes the gold, silver, and bronze medalists from the most recent Olympics Games and World Championships.

The 41st Pre Classic, a member of the IAAF Diamond League of elite international meets, will be held May 29-30 at the historic Hayward Field.

Jairus Birech of Kenya and American Evan Jager own the two top spots as rated by All-Athletics.com, the official data partner of the IAAF Diamond League, as well as the top 2 in the 2014 world rankings by Track & Field News.

Birech, 22, has been on the fringe of making the dominant Kenya team for the Olympics and World Championships – if he competed for any other country, he would already have two such appearances.  Last year Birech finally broke through, dominating the IAAF Diamond League with a record six wins.  His 7:58.41 was fastest in the world by almost 5 seconds.

Jager is also coming off a breakout year.  He broke his own American record by running 8:04.71, and impressively finished the year No. 2 in the T&FN world rankings – highest by an American since 1985, going back to Hall of Famer Henry Marsh (a 7-time winner at the Pre Classic).  Jager owns the five fastest times ever by an American – all under 8:10 (the only American with more than one).  At last year’s Pre Classic, with this event not on the menu, Jager set a 3:53.33 mile PR.

With no shortage of talent, drama will surely make a return.  Ezekiel Kemboi is the reigning Olympic and World champion and owns five career major gold medals (2004 & ’12 Olympics and Worlds in ’09, 11 & ’13).  His attempt to win a second Pre Classic title in 2013 was a finish to remember...or perhaps forgotten.  Judges disqualified Kemboi for shoving, as Kenyan countrymate Conseslus Kipruto (then only 18 years old) set a meet record.

Two months later, that duo went 1-2 at Moscow’s World Championships, Kemboi with his last victory to date over Kipruto, who is now 6-3 career over Kemboi.  Kipruto’s fast finish at Moscow was 0.36 seconds short of completing a career World Youth/Junior/Senior sweep of golds, something he can still achieve later this summer at the Beijing World Championships.  Still, Kipruto finished the ’13 season with the Diamond Trophy and ranked No. 1 in the world by T&FN.

After Kemboi, France’s Mahiedine Mekhissi is the next most decorated runner in the field, with a pair of Olympic silver medals (2008 & ’12) and World bronzes (2011 & ’13).  He was famously DQed last summer after winning his third straight European title – for taking off his jersey in celebration before crossing the finish line.  He is the only non-Kenyan to have won an IAAF Diamond League race in this event in the circuit’s 5-year history.

Abel Mutai of Kenya is another Olympic medalist in the field, owning bronze from London.  He is just one of several Kenyans in the field to have world age gold medals.  Mutai won the World Youth gold in 2005, as did Hillary Yego in ‘09.  Both Mutai and Yego have already been ranked four times in T&FN’s top 10 world rankings, including last year.

While Youths run the 2000-meter steeple, Juniors have progressed to the full 3000 meters.  Barnabas Kipyego of Kenya won last year’s World Junior gold at Hayward Field.  Jonathan Ndiku is also from Kenya – he is the only 2-time World Junior gold medalist in this event (2008 & ’10) and earned his first T&FN world ranking last year.

North Americans Dan Huling and Matt Hughes add talent to the field.  Huling is a 3-time member of USA’s World Championships team, while Canadian record holder Hughes – a 2-time NCAA champion while at Louisville – was 6th at the Moscow World Championships.

Noteworthy is that 9 out of 10 of the top steeplers in the world on the T&FN annual rankings list are set to compete at the Prefontaine Classic.