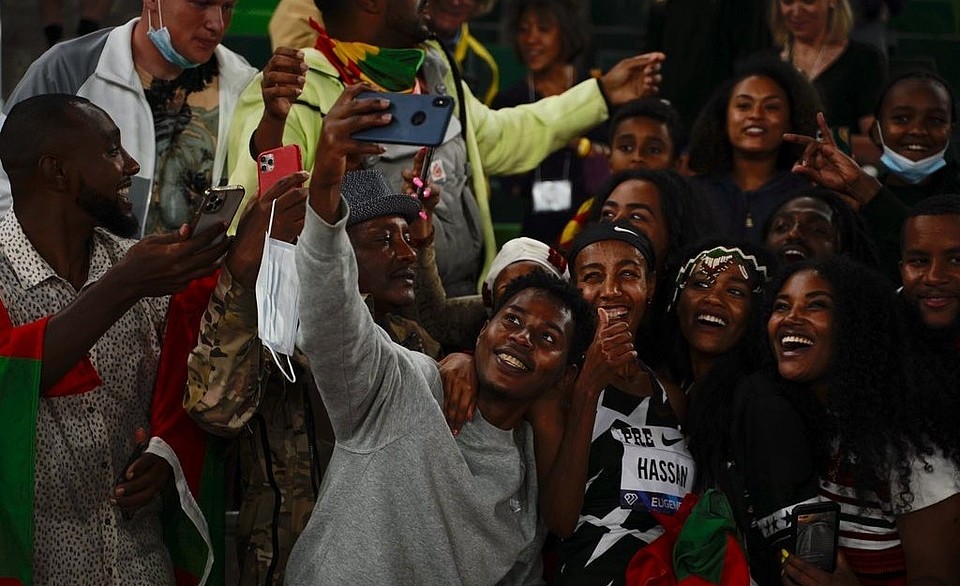 The Prefontaine Classic returned back to its home, a re-imagined Hayward Field on the University of Oregon campus after a break of 3 years and 86 days with a night of distance races before an enthusiastic gathering of hometown fans.

The fields were loaded with international stars with Sifan Hassan of the Netherlands topping the bill with an attempt at the world record in the 5000 meters. Hassan, the double Olympic gold medalist in the 5k and 10k at Tokyo, was close to record pace until just after 3000 meters, which she passed in 8:30.54.

Running alone since just before the 2400-meter point, Hassan slowed from running 67- and 68-second laps to 69s and 70s before finishing in 14:27.89. Almost 15 seconds back was a close finish for second, which went to Ethiopia’s Senbere Teferi in 14:25.25, just ahead of the 14:42.85 of Ethiopian countrymate Fantu Worku. Loice Chemnung of Kenya led four more under the 15-minute mark.

The women’s 2-mile provided some expected record action, as the seldom-run race had a stellar field. Francine Niyonsaba of Burundi took the lead from Ethiopia’s Letesenbet Gidey with just over 600 meters to go and opened up a large gap. She crossed the finish line in 9:00.75, the second fastest time ever recorded in the event. Only the all-time world best of 8:58.58 set by Ethiopia’s Meseret Defar in 2007 is faster.

Niyonsaba, a former two-time world indoor champion at 800 meters who just recently turned to long distances, was timed in 8:26.79 when she passed 3000 meters to register the world’s fastest time of the year in that event as well.

In the International Mile, Craig Engels of the USA overtook Canada’s Charles Philibert-Thiboutot at the top of the homestretch and even waved to the crowd with a huge grin. Meanwhile, storming from seemingly nowhere was New Zealand’s Geordie Beamish, who sprinted past for the win in 3:54.86. The time shaved 0.06 off his lifetime best recorded two weeks ago. Engels (3:55.41) and Philibert-Thiboutot (3:55.48) followed as the first eight broke 4 minutes.