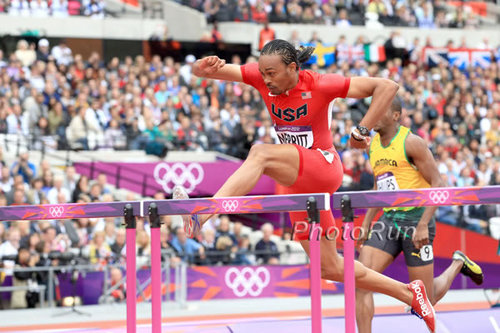 While America’s two fastest men’s 110-meter hurdlers ever have won the last two major championship gold medals, perhaps neither one is favored to win at the Prefontaine Classic.

(The 41st Prefontaine Classic, a member of the IAAF Diamond League of elite international track & field meets, will be held May 29-30 at the historic Hayward Field)

Eugene, Oregon – While America’s two fastest men’s 110-meter hurdlers ever have won the last two major championship gold medals, perhaps neither one is favored to win at the Prefontaine Classic.

Aries Merritt etched his name in high hurdle history in 2012.  He ended a 16-year U.S. Olympic gold medal drought by winning the London Olympics, and a month later became the first American since Roger Kingdom in 1989 to claim the world record, clocking 12.80 to win the IAAF Diamond Trophy.  That 12.80 lowered the WR by .07 seconds, the largest improvement since Renaldo Nehemiah did the same when he ran the first sub-13 at 12.93 in 1981.

David Oliver is the reigning World Champion, winning gold at Moscow in 2013.  He is a two-time Pre Classic champ, and his 2010 victory at 12.90 equaled the American record at the time and remains the fastest ever run on U.S. soil.  Oliver is the only athlete in this event to rank in the world top 10 by Track & Field News in each of the last nine years, including twice at No. 1, while also becoming the only two-time winner of the IAAF Diamond Trophy in this event (2010 & 2013).

Though these veterans (Merritt is 29, Oliver soon will be 33) can never be counted out, a cadre of younger hurdlers is attracting more attention.

France’s Pascal Martinot-Lagarde torched last year’s IAAF Diamond League at age 22, winning the Pre Classic—the first of five Diamond League victories—and coming away with the Diamond Trophy and T&FN  No. 1 world ranking.  His 12.95 last year made France just the second nation with more than one sub-13 high hurdler.  This summer in Beijing, he will be seeking his first outdoor major medal, having already collected World silver (2014) and bronze (2012) medals indoors in the 60-meter version.

Hansle Parchment lowered Jamaica’s national record to sub-13 territory in 2014.  He was second to Martinot-Lagarde last year after posting a stunning victory in the 2013 Pre Classic.  He was 22 when he earned the Olympic bronze medal in 2012, the first Olympic medal for Jamaica in this event.

Orlando Ortega of Cuba is only 23 years old and was an Olympic finalist in 2012.  Outdoors he is just .02 shy of joining the sub-13 club, while indoors this winter he posted the world’s fastest 60-meter hurdle time at 7.45.  Ortega was runner-up at the 2013 Pre Classic to Parchment, by .03 seconds.

American Aleec Harris has yet to lose this year, indoors or out, with a pair of world-leading marks of 13.23; last year he was the NCAA runner-up and set two PRs at Hayward Field.

Wenjun Xie will be making his first Prefontaine Classic appearance.  He won the Asian Games last year at age 24 and is China’s third-fastest-ever high hurdler.  The only one faster from China at his age was former WR setter Liu Xiang, a four-time Pre Classic champion.