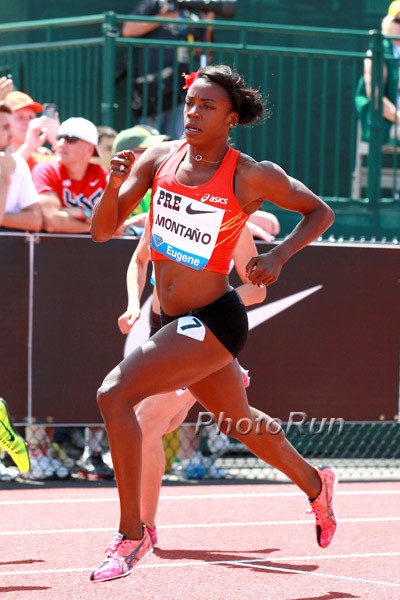 The women’s 800 meters at the Prefontaine Classic will feature a strong quartet from Team USA, although they will face formidable opposition from a pair of tough Kenyans.

(The 41st Prefontaine Classic, a member of the IAAF Diamond League of elite international track & field meets, will be held May 29-30 at the historic Hayward Field.)

Eugene, Oregon – The women’s 800 meters at the Prefontaine Classic will feature a strong quartet from Team USA, although they will face formidable opposition from a pair of tough Kenyans.

The youngest of the Americans is precocious Ajee’ Wilson, who will turn all of 21 on May 8. She was ranked No. 2 in the world by T&FN last year, after sweeping the  U.S. indoor and outdoor titles, the youngest to do so since a 15-year-old Mary Decker in 1974.  As a 19-year-old, Wilson was a finalist in the 2013 World Championships in Moscow, where she set the American Junior record of 1:58.21.  Her international experience also includes gold medals at the 2012 World Juniors and 2011 World Youth Championships – she is the only American to win either title.

Brenda Martinez is the only American to have ranked twice in the world’s top 4 the last two years (No. 3 in ’14, No. 4 in ’13).  She anchored USA’s winning 4x800 team at last year’s inaugural World Relays, receiving the baton from Wilson before blitzing a 1:57.2 split to extend the lead on Kenya, which was anchored by Eunice Sum.  Martinez has some history of making history – at the 2013 World Championships she earned bronze, the first World outdoor medal of any kind for an American in this event.  And in the 1500, she is America’s No. 10 ever at 4:00.94.

After four straight years of making a major world final (longest streak ever by an American in this event), Alysia Montano took a year off from racing in 2014.  Well, almost – she was seven months pregnant running the heats of last June’s U.S. outdoor championships.  Montano, known also for racing with a decorative flower in her hair, gave birth to daughter Linnea on August 15.  Mom, the first American this century to win a major 800 medal (2010 World Indoor bronze), has already added to her U.S. title collection, capturing the 600 meters indoors this winter (she now has five U.S. titles in all events).  Montano anchored the previous American record 4x800, accompanied by Martinez and Wilson at the 2013 Penn Relays.

Chanelle Price is the reigning World Indoor gold medalist, becoming the first-ever American to win a major world gold in this event.  She is also the defending Pre Classic champ, and her memories of Hayward Field date back to a U.S. junior title in 2009 as a Tennessee freshman.  Price ran the leadoff leg on America’s record-setting 4x800 last year in the Bahamas.

Eunice Sum of Kenya has led the Track & Field News world rankings the last two years while becoming the only two-time IAAF Diamond Trophy winner in this event.  The reigning World champion, Sum started her international career in the 1500, making her country’s powerful Olympic team in 2012.  While she flirted with a sub-4 in last year’s Pre Classic (4:01.54), the world has seen her best fit in the 800.  In 2014, she won four straight Diamond League races (most in one year), then claimed the African Championships and Commonwealth Games.

Jepkosgei and Sum will face this new wave of Americans, boasting their best depth since perhaps 1998 (when the US world ranked 2-4-6).  The U.S. 2-3 last year was its best top-end ever showing.

Three Europeans who ranked among the world’s top 7 last year add to an incredible field worthy of a World Championships final.  Each has set her PR on big stages.  Lynsey Sharp of Great Britain was the 2012 European gold medalist but ran her PR 1:58.80 earning silver last year.  Russia’s Yekaterina Poistogova was 2012 Olympic bronze medalist with her PR 1:57.53 and a finalist in the 2013 Worlds.  Marina Arzamasova of Belarus won the European Championships last August with her PR 1:58.15 after earlier taking the bronze medal at the World Indoors.