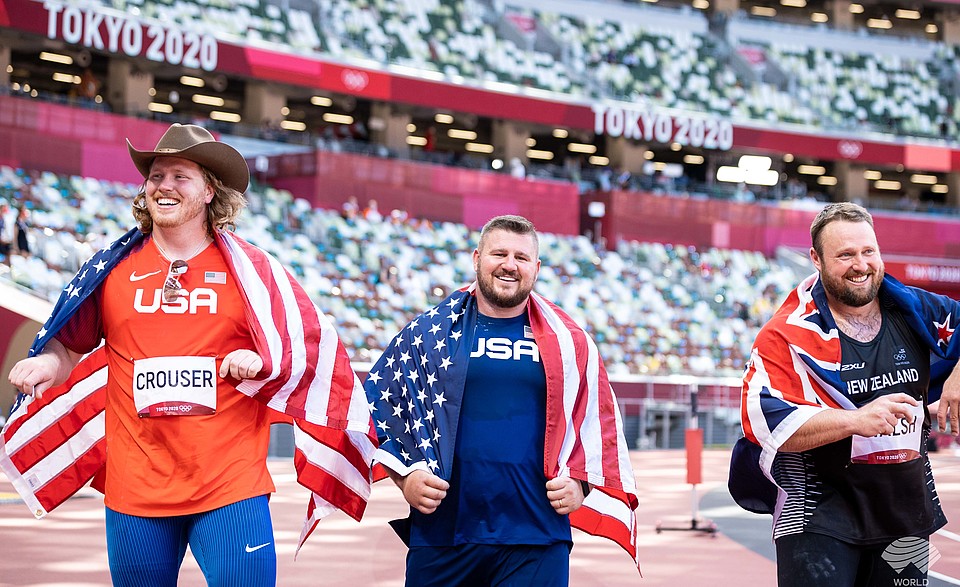 The field is as strong as possible, featuring a complete sweep of the medalists from Tokyo who duplicated their order from the Rio Olympics. The trio owns every major gold medal since 2015.

Eugene, Oregon – Ryan Crouser leads a dynamite shot put field at the Prefontaine Classic, and this time he returns with a second Olympic gold medal and as the world record holder.

The field is as strong as possible, featuring a complete sweep of the medalists from Tokyo who duplicated their order from the Rio Olympics. The trio owns every major gold medal since 2015.

The top names in the field have much combined history, including sweeping all three medals from the greatest-ever shot put competition – the thrilling 2019 World Championships.

The Pre Classic shot put always attracts special attention, and this year it has additional excitement as Oregon native Crouser returns to the site where he obliterated the world record in winning the U.S. Olympic Team Trials in June at the re-imagined Hayward Field on the University of Oregon campus.

The first six announced entrants include five who made the Tokyo final, while the sixth member of the loaded field missed making the always-powerful U.S. team by just one inch.

Ryan Crouser, 28, dominated the Tokyo Olympics in winning his second gold, launching all six of his efforts beyond the existing Olympic record. He became the first in history to record three 75-foot (22.86) throws in the same series. He topped it all by adding history’s second-ever 76-foot throw at 76-5½ (23.30).

His dominance includes great success at Hayward Field, where he owns the nine longest throws, topped by his mammoth WR of 76-8¼ (23.37) at the Olympic Trials. He is undefeated since losing the Doha Worlds in 2019, when a last-round effort by Joe Kovacs relegated him to silver despite his first 75-foot throw.

Joe Kovacs, 32, had the effort of his life in the last round of the World Championships in Doha, moving from 4th to 1st with a massive PR of 75-2 (22.91) as he earned his first gold since the 2015 Beijing Worlds. The Penn State grad added a second Olympic silver medal to the one he earned in Rio and has one from the 2017 London Worlds as well. His victory over Crouser and Tom Walsh in Doha made him the first to beat both twice – the first time was in 2016 when he won his second-straight Pre Classic title.

New Zealand’s Tom Walsh, 29, owns the most major gold medals in the field with three, as his title at the 2017 London Worlds was sandwiched by World Indoor wins in 2018 and 2016, the latter in Portland. He was in great shape in his bid to defend his World Championships title in Doha – in the first round, he exploded with a PR 75-1¾ (22.90) that made him the first 75-footer in more than 30 years. The historic last round saw two more join the 75-foot club, relegating him to just bronze, the same medal he earned in Rio and again in Tokyo.

Walsh won his third Wanda Diamond League crown in 2019 and, like Kovacs will be competing in his seventh-straight Pre Classic (the two are tied 3-3 in this meet).

Has anyone ever beaten the “big three” of Crouser, Kovacs and Walsh? It’s happened twice, most recently in the 2019 Pre Classic when the field was so deep that six men exceeded 70 feet (21.34) – the only time that’s occurred on U.S. soil.

Darlan Romani, 30, led the charge, PRing three times to ultimately join the 74-foot club at 74-2¼ (22.61). The Brazilian record holder was a prime figure in the dramatic Doha Worlds. He was in line for a silver medal until the last round knocked him down to bronze and finally fourth. He won his ninth-straight Brazilian title earlier this year and set a seasonal best of 71-9½ (21.88) in finishing fourth at Tokyo.

Americans Darrell Hill and Payton Otterdahl waged an exciting duel in June for the final berth on the U.S. team. Hill moved into the third spot in Round 5 at 71-10 (21.89) but the very next thrower was Otterdahl, who responded with a PR 71-11 (21.92) to regain the final team spot, which became final when neither improved in the last round.

Otterdahl, 25, is a Minnesota native who swept the NCAA Indoor shot and weight titles in 2019 as a senior at North Dakota State. His college career also showed additional versatility as he was NCAA runner-up in the discus later that spring. He first earned national notice in the discus, winning the Pan-American Junior (U20) gold in 2015, but now focuses on the shot.

Hill, who will turn 28 during the week of the Pre Classic, is a Penn State grad who has been part of previous dramatic finishes. He made the 2016 U.S. Olympic team when the Trials were also at Hayward Field by improving over 1½ feet with his first 70-foot effort.

Hill won the 2017 Wanda Diamond League final when he cranked a nearly 2-foot improvement to move from 5th to 1st with his PR 73-7½ (22.44), denying Crouser his first DL title. It was also the first time anyone had beaten Crouser, Kovacs and Walsh in the same meet.