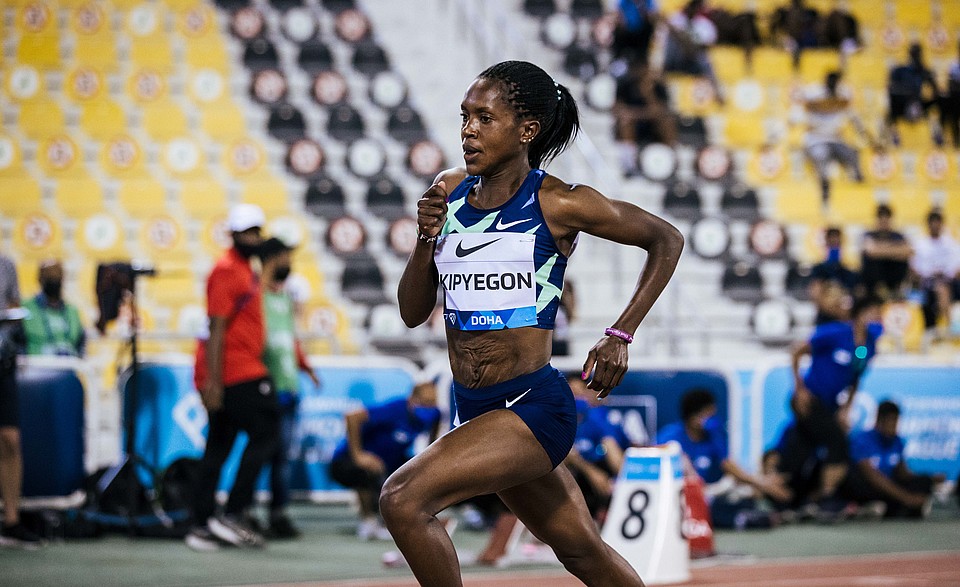 A deep field accompanies the two headliners as eight of the top 12 at the Olympics are entered and a total of nine have run sub-4.

Eugene, Oregon – There will be no need for introductions when Faith Kipyegon and Laura Muir line up for the women’s 1500 meters at the Prefontaine Classic.

The pair’s 14th and most recent meeting came in Tokyo, when Kipyegon led Muir for the top two medals in the Olympic 1500 meters. Actually, all three medalists from that race will be running at the Pre Classic, but bronze medalist Sifan Hassan – also gold medalist in the 5000 and 10,000 – has opted for the 5k (a field still to be announced).

This will be the third meeting on U.S. soil for Kipyegon and Muir but like many the first at the re-imagined Hayward Field on the University of Oregon campus. Their other two races were also at the Pre Classic, with Kipyegon winning both.

A deep field accompanies the two headliners as eight of the top 12 at the Olympics are entered and a total of nine have run sub-4. The most ever under 4:00 in one race in the U.S. is five, achieved at the 2014 Pre Classic.

Faith Kipyegon, 27, became just the second woman to win two Olympic gold medals in the 1500, taking the Tokyo race with an Olympic record of 3:53.11. A month earlier the Kenyan record holder was exactly 1 second off the world record at 3:51.07 to become No. 4 all-time.

This will be Kipyegon’s 7th Pre Classic. A three-time winner of this event, her first victory came in 2016 at 3:56.41, which remains not only the meet record but also the fastest run on U.S. soil. She has won or finished second in every major championships she’s run since she was 20 in 2014.

Laura Muir, 28, earned her first Olympic medal with the silver from Tokyo, running a British record 3:54.50. The Scottish native has won the Wanda Diamond League trophy twice, the most recent coming in 2018.

Muir’s silver in Tokyo wasn’t just her first Olympic medal – it was her first major outdoor medal. At the 2017 London Worlds, she made two finals, taking 4th in a wild 1500 finish (just .07 seconds short of a medal) before a 6th in the 5k. This will be the fourth Pre Classic for Muir.

The next-highest finisher from Tokyo is Canada’s Gabriela DeBues-Stafford, 25, who formerly trained in Scotland with Muir but now is based in Oregon with the Bowerman Track Club. DeBues-Stafford was 5th in Tokyo, moving up from the 6th she took in Doha at the 2019 World Championships when she set the Canadian record of 3:56.12.

Her fastest this year – and second-fastest ever – is 3:58.28 from the Tokyo semifinals. She made her first Olympics in 2016 at age 20 and first ran at Hayward Field in 2014 at the World Junior Championships, finishing 9th in the 3000.

Shannon Osika, 28, just missed making the U.S. Olympic team, finishing 4th at the Trials. A former Big Ten 1500 and indoor mile champ for Michigan, Osika will be racing in the Pre Classic for the first time since pacing the 2019 3k, a race that resulted in a Diamond League record 8:18.49.

Two Australians made the Tokyo final and each is familiar with Hayward Field’s previous configuration. Linden Hall, 30, earlier this year became the first Aussie to run sub-4 at 3:59.67 and bettered that time in Tokyo with a 6th-place finish in 3:59.01. The Florida State grad has PRed in two of her previous four Pre Classics.

Gaining the Australian record in Tokyo was former Oregon star Jessica Hull. She finished 11th in the Tokyo final after running her record 3:58.81 in the semifinals. Hull, who earned her first Australian record last year in the 5k (14:43.80), won two individual NCAA titles for the Ducks and ran on two winning distance medley relay teams.

Gaia Sabbatini, 22, is the youngest in the field, and ran her lifetime best 4:02.25 in Tokyo, an improvement by over 3 seconds.