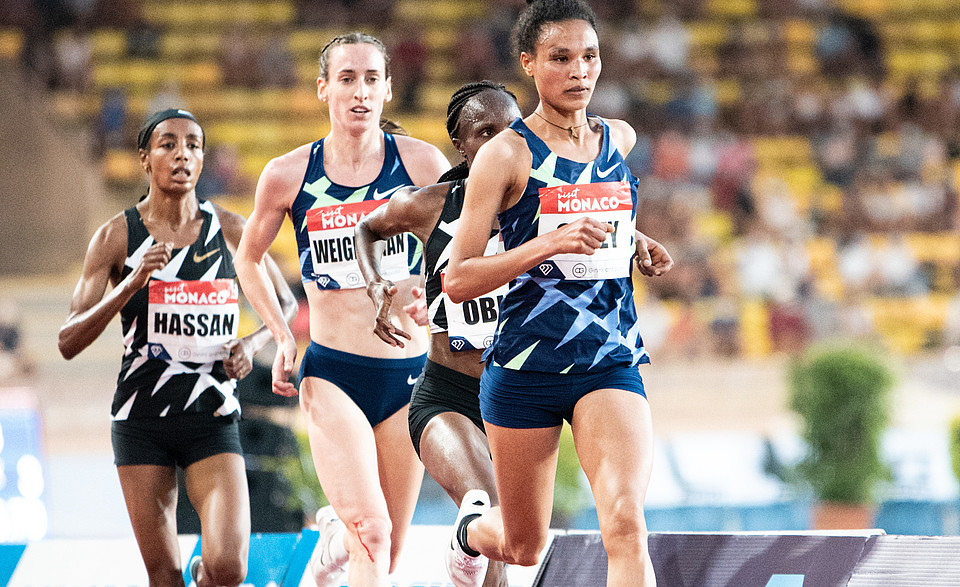 An eye-opening women’s 2-mile and a special appearance of the International Mile are also on the menu, the latter bringing additional history to a great home for milers.

Eugene, Oregon – The lights will be shining bright for the world’s best athletes in search of fast times at the Prefontaine Classic’s Distance Night in Eugene.

Distance fans don’t want to miss this one.

Sifan Hassan’s attempt for the world record in the 5000 meters has already been announced, but even that race has additional world-class talent ready to sample some magic at the re-imagined Hayward Field on the University of Oregon campus.

An eye-opening women’s 2-mile and a special appearance of the International Mile are also on the menu, the latter bringing additional history to a great home for milers.

The Pre Classic’s distance night began as an annual tradition in 2011, but this will be its first return to Hayward Field since 2018, some 3 years and 86 days before this Friday night.

Festivities for the entire meet – including a long-awaited opening celebration for the re-imagined Hayward Field – are scheduled to begin at 8:50 p.m. Pacific Time.

The women’s 2-mile is another headlining event.

Hellen Obiri, 31, is also impressive. The Kenyan record holder in the 5k won gold medals at the 2017 and 2019 World Championships. She also won gold at the 2019 World cross-country championships as well as way back in 2012 in the World Indoor Championships in the 3k. Obiri has won three Pre Classic titles (once in the 5k and twice in the 1500). She was silver medalist in the Tokyo 5k.

Amy-Eloise Markovc, 26, is a Briton better known in the U.S. as Neale, the name under which was NCAA cross-country runner-up in 2017 while at Washington. She has PRed in the 5k and 10k this year as is looking for her first sub-15.

Also keep an eye out for 20-year-old Ethiopian Lemlem Hailu. She’s a Tokyo 1500 semifinalist who already owns two Ethiopian titles in 1500 and ran 4:00.35 earlier this year.

The women’s 5k race will certainly have attraction with Hassan’s attempt at the WR, but the race is set to include many others attempting fast times. Fantu Worku, 22, set a PR of 14:26.80 in July but couldn’t make the tough Ethiopian team for the Olympics. Her range includes a 4:05.81 PR in the 1500.

American Rachel Schneider, 30, will return to the site where she made the Olympic team in both the 5k and 10k. A former Georgetown All-American, she has fastest 1500 PR of the Americans in the field at 4:02.26.

Abbey Cooper, 29, just missed the U.S. team for Tokyo with a 4th-place at the U.S. Olympic Trials after clocking a solo 15:07.80 in the heats just to get the Olympic standard and has since run sub-15. As Abbey D’Agostino, she made the Rio team and earned international respect for assisting another runner as both fell in the 5k heats. As a collegian, the Dartmouth grad won seven NCAA titles including cross-country and indoor and outdoor track.

Alicia Monson, 23, earned a U.S. berth in the 10k for Tokyo. A former NCAA indoor 5k champ and cross country runner-up for Wisconsin, Monson has PRed four times over three distances since December, including a 5-second improvement to 4:07.09 in the 1500.

The International Mile is unique to the Pre Classic and was born in 2010 when the Pre Classic was overwhelmed with interest in its famous Bowerman Mile. It has since become a world-class race featuring established milers as well as rising stars.

This year’s entrants are worthy of the event’s best.

Vincent Ciattei, 26, has never competed in the Pre Classic but has twice been NCAA runner-up while at Virginia Tech in the indoor mile and outdoor 1500.

Geordie Beamish, 24, won the 2019 NCAA indoor mile title while at Northern Arizona and will be making his Pre Classic debut.

The race is likely to provide history with perhaps the 200th miler to record a sub-4 mile in the Pre Classic. We’re standing at 197 and 8 of the entrants are making their debut at the Pre Classic in any event.

The full list of entrants in all events for the Pre Classic is available HERE.

Distance Night in Eugene at the Prefontaine Classic will exclusively be broadcast live on USATF.TV on Friday, August 20. The worldwide broadcast will only be available to +PLUS subcribers. Sign-up here for +PLUS.