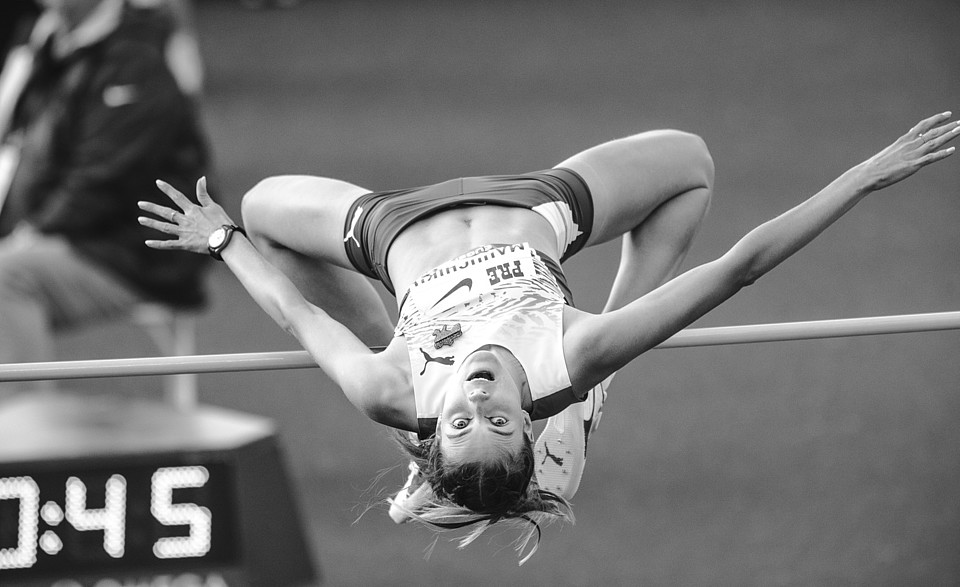 Yaroslava Mahuchikh of Ukraine jumped to a world leading 2.00m (6-6.75) at The Prefontaine Classic. Photo by Mercedes Oliver

The first day of the Prefontaine Classic was a resounding success, with athletes excited to find their footing at the venue that will play host to the World Championships later this summer.

Mondo Duplantis of Sweden took first in the men’s pole vault, his first outdoor competition of the season after the event was moved indoors due to wind in Doha. “I’d be lying if I said I wasn’t a bit bitter about not making that 6.07,” Duplantis said afterwards, “I felt like it was very possible. I gave it three good attempts, but it wasn’t for today I guess.” His winning height was 5.91m (19-4.75). Chris Nilsen of the United States placed second in 5.81m (19-0.75). Sondre Guttormsen took third with a personal best and national record for Norway in 5.81.

In the women’s high jump, Yaroslava Mahuchikh of Ukraine jumped to a world lead of 2.00m (6-6.75) as she opened her season. American Vashti Cunningham took second with a 1.93m (6-4) jump, and Nadezhda Dubovitskaya of Kazakhstan jumped to a season’s best for third in 1.93m.

Breaking up the international competition, the USATF Championship 10,000m took to the track. Olympians Karissa Schweizer (30:49.56) and Alicia Monson (30:51.09) ran away from the field, building an over thirty second lead over a deep chase pack. Natosha Rogers (31:29.80) narrowly outkicked Emily Infeld to secure the final spot on the US team for the World Championships, set to be held at Hayward Field in July.

In the men’s race, Joe Klecker (28:28.71) out-leaned Grant Fisher (28:28.81) to take the win. “Eugene this year is the ultimate goal,” Klecker said post-race, “Everything I did starting January first was to get ready for today to qualify for Worlds and then be ready to represent USA the best I can come July.” Sean McGorty took the bronze position in 28:29.57. “It was not the race I was expecting,” said McGorty, “[it was] pretty choppy, a bit of cat and mouse. We went out ridiculously slow, I’m sure the women probably went out faster than we did.” With a lap to go he found himself in less than ideal positioning, “I just tried to stay as relaxed as possible and keep believing space would open up.”

American Olympian Valarie Allman threw her way to a 68.35m (224-3) win in the women’s discus, followed by Sandra Perkovic of Croatia (65.50) and Kristin Pudenz of Germany (62.58). “Over the last three years that I’ve been a professional all of the diamond league events that I have done have been overseas,” Allman says. “Competing here on home soil definitely felt different. I felt a different motivation kick in once the competition started.”

In the women’s two mile Francine Niyonsaba dominated the competition, running to a meet record and world lead time of 8:59.08, though falling short of the world record attempt. When asked in the pre-race presser about the addition of strong competitors to the field, Niyonsaba wasn’t phased, “When I’m running, I’m there as me and competitive with myself. But good competitors make me strong.” She was followed by Beatrice Chebet of Kenya (9:14.71) and Laura Galván of Mexico (9:15.74).

Ejgayehu Taye of Ethiopia stole the show in the women’s 5,000m that was billed as Letsenbet Gidey’s swing at breaking her own world record of 14.06.62. As Gidey fell off the pacing lights in the latter stages of the race, Taye reeled her in, racing to a personal best, meet record, and world leading time. Taye’s 14:12.98 is the fastest 5,000m ever run on US soil, and the fifth fastest time ever in the world. Rahel Daniel of Eritrea finished third in 14:36.66, setting a national record.

Joshua Cheptegei of Uganda ran a world lead time of 12:57.99 in the men’s 5,000m. Hayward Field holds a special place in his heart as he won the World Juniors here in 2014.“My goal was to come and break the world record,” Cheptegei said post-race, “but I realized after 1K it was not possible.” He was followed by Milkesa Mengesha of Ethiopia (13:01.11) and Daniel Simiu Ebenyo of Kenya (13:10.11).