Fast is Back in the Pre Classic Women’s 100 Meters 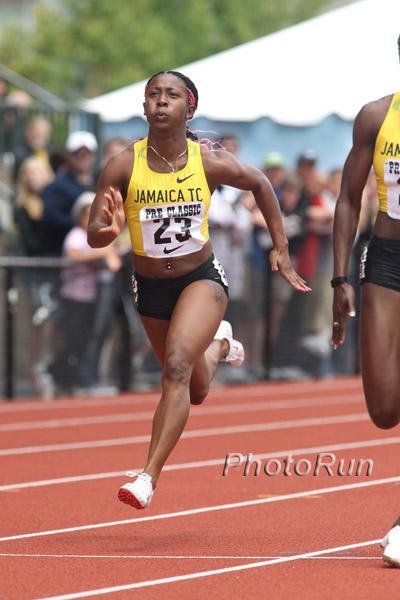 The world’s fastest women from each of the last four years will meet in this year’s Prefontaine Classic 100 meters. This group features versatile performers who have won a total of seven IAAF Diamond Trophies across three events.

Fast is Back in the Pre Classic Women’s 100 Meters

Eugene, Oregon – The world’s fastest women from each of the last four years will meet in this year’s Prefontaine Classic 100 meters.  This group features versatile performers who have won a total of seven IAAF Diamond Trophies across three events.

Shelly-Ann Fraser-Pryce won the last two Olympics, joining Gail Devers and Wyomia Tyus in a select group of such Olympic repeat champions.  The Jamaican superstar is also the reigning World Championships gold medalist, adding to the gold she won in 2009.  She also won the most recent Pre Classic in a wind-aided 10.71 in 2013 – the fastest time in the world under any conditions since Fraser-Pryce clocked her Jamaican record 10.70 in 2012.  Fraser-Pryce won IAAF Diamond Trophies in 2012 and 2013, as well as another in the 200 in 2013.

Blessing Okagbare is the African record holder at 10.79.  She was 2nd behind Fraser-Pryce in the 2013 Pre Classic at 10.75w.  A multi-event threat, in 2013, she won World Championships medals in the long jump (silver) and 200 (bronze).  Okagbare was also Olympic bronze medalist in 2008 long jump.  She has set personal best-ever marks in the last three Pre Classics.  She won the Shanghai 100 meters earlier this month, giving her the early IAAF Diamond League lead.

The world’s fastest last year was American Tori Bowie, who ran 10.80.  She shocked the world with a world-leading 22.18 to win last year’s Pre Classic 200 out of lane 1.  Bowie is also a former NCAA indoor and outdoor long jump champion from Southern Mississippi.  She had the second-longest jump in the world last year behind Bartoletta.

Jamaica’s Elaine Thompson claimed the early 2015 world lead with a personal record 10.92 in April.  She backed that up a month later with another victory (10.97) over Okagbare and Allyson Felix in the Jamaica Invitational.  Her only previous races in the U.S. have been at the Penn Relays, where she helped her team to two Championship of Americas titles (2014 sprint medley, 2015 4x200).

An additional women’s 100-meter race is included for first in Pre Classic history.  It is called the International 100 and will feature even more world-class talent.

Kaylin Whitney, just turned 17 but already a pro, set a pair of World Youth records at last year’s U.S. Junior championships at Hayward Field.  In the 100, she clocked 11.10 and added a 22.49 in the 200.  She went on to win the World Junior gold in the 200 and 4x100, also at Hayward Field.  Whitney is eligible for two more years for Junior records.

Barbara Pierre of the U.S. has ranked among the world’s top 10 by Track & Field News the last two years.  She has a best of 10.85 and won six NCAA Division II titles while at St. Augustine’s.

Kimberlyn Duncan has an award few have received – The Bowerman, for being voted the top collegiate athlete, thanks to a 2013 season at LSU where she won a third-straight NCAA 200-meter title as well as third-straight top-3 finish in the 100.  She won the U.S. title in the 200 in 2013 and has ranked among the world’s top 10 by T&FNevery year since 2012.

Trinidad’s Kelly-Ann Baptiste won bronze at the 2011 World Championships.  She is a former NCAA 100 champion for LSU.