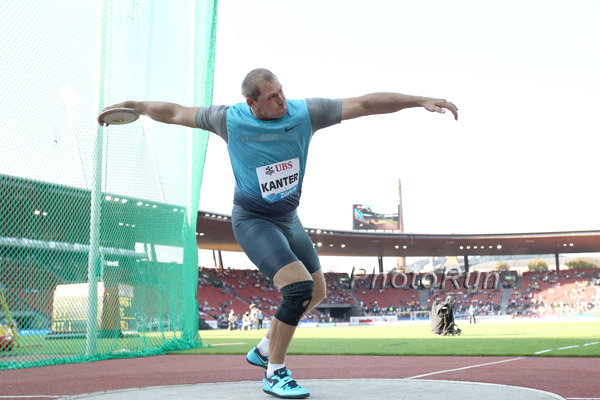 The two longest throwers of the last 15 years highlight a world-class men’s discus field at the Prefontaine Classic.

Eugene, Oregon – The two longest throwers of the last 15 years highlight a world-class men’s discus field at the Prefontaine Classic.            The 41st Pre Classic, a member of the IAAF Diamond League of elite international track & field meets, will be held May 29-30 at the historic Hayward Field.  The Pre Classic is an American track tradition and this year will be a major stop as the planet's top pros prepare for the World Championships in Beijing, China.             Longest in the field are Estonia’s Gerd Kanter and Poland’s Piotr Malachowski.  The two have combined to win four of the IAAF Diamond League’s five Diamond Trophies in this event.            Kanter is history’s No. 3 ever at 240-9 (73.38).  He won Olympic gold at Beijing in 2008 as well as the 2007 World Championships in Osaka.  He has ranked among the top 3 in the prestigious Track & Field News world rankings every year since 2005, and his war chest also includes a pair of World silvers (2005 & ’11) as well as three bronze medals (Olympics in ’12, World in ’09 & ’13).  Kanter also owns the longest throw on U.S. soil at 236-3 (72.02).            Malachowski is history’s No. 5 ever at 235-8 (71.84).  A former Pre Classic champion, he has silver medals from the 2008 Olympics as well as the 2009 and 2013 World Championships.  He has ranked No. 2 in the T&FN world rankings five times, with four behind 2013 Pre Classic winner Robert Harting, who is still recovering from knee surgery performed last October.            The Kanter-Malachowski rivalry dates back to 2006, with Kanter leading 39-31, but since 2013, Malachowski owns a 15-4 advantage.            The elite field also includes the remaining top eight available athletes from theT&FN world rankings, and among the most decorated is Ehsan Hadadi of Iran with Olympic silver from 2012 and bronze from the 2011 Worlds.  He also owns golds from the Asian Games (3) and Asian Championships (4).            Cuban Jorge Fernandez, Robert Urbanek of Poland, and Viktor Butenko of Russia earned their first T&FN world rankings last year.  Fernandez, at No. 4, was the highest for his country since 1989.  No. 5 Urbanek only beat Malachowski once last year – but that was for bronze at the European Championships.  Butenko was a World Championships finalist in 2013 at age 20.            Two Martins round out the field:  Martin Kupper of Estonia owns the early 2015 world lead with his personal best 218-8 (66.67) winning the European Cup winter throwing competition in March; and Martin Wierig of Germany was ranked No. 6 in the world by Track & Field News in 2014.