Davis and Woodhall make the most of their first Pre Classic 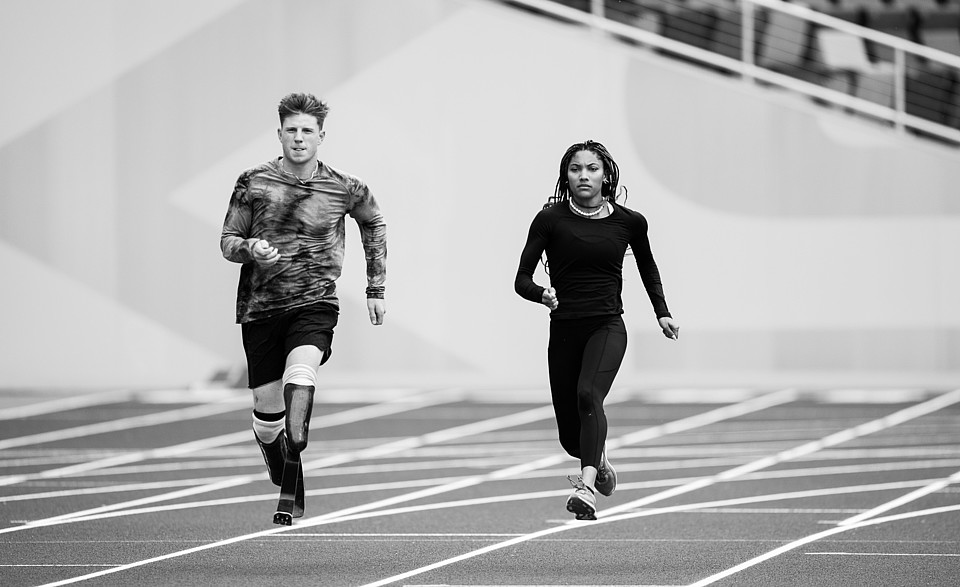 Hunter Woodhall and Tara Davis practice at Hayward Field ahead of the 2022 Prefontaine Classic. Photo by Taylor Sims

After 33 years, paralympic events have returned to The Prefontaine Classic. Saturday’s events at Hayward Field at the University of Oregon included the Women’s 100m T63 and the Men’s 400m T62.

The return of the 400m T62 allowed Paralympian Hunter Woodhall and his fiancé, Tara Davis, to compete at their first Prefontaine Classic together. Davis, a 2020 Olympian, competed in the long jump.

Representation on the Track

“I was just happy to get around the track healthy today,” said Woodhall, who was dealing with a back injury earlier in the week. The injury kept him from running until practice at Hayward Field on Friday. “I wasn’t too worried, the cold was a little skeptical but it warmed up, actually it was pretty beautiful out there.”

For Woodhall, one of the highlights of his competition was the representation of paralympic athletes at the Pre Classic.

“It feels amazing, honestly just to have that representation was really great and they did a really great job of getting athletes here,” said Woodhall. The 400m T62 field included all three medalists from Tokyo.

“It was just awesome to be out there and represent with the crowd and everything,” Woodhall added. He was all smiles after the race as he and his competitors congratulated each other.

Davis also finished third in her event after jumping 6.73m (22-1) on her second attempt. The long jumper, who placed sixth at the Olympic Games last year, was joined in by several other Olympic finalists in the field.

“I'm just hoping for a healthy competition,” Davis said at a press conference on Friday.

Davis had both a healthy and happy competition on Saturday, as she could be seen cheering for her competitors and celebrating with Sweden’s Khaddi Sagnia after Sagnia set a new personal best of 6.95m (22-9.75).

“I’ve been there, I’ve been in that position and that’s a huge PB. 6.95—you’re almost at 7 meters,” said Davis. “I just know how it feels to hit those PBs so I just wanted to celebrate with her.”

Davis’ positive energy was unmatched at the Pre Classic on Saturday, despite occasional heavy rain and wind in the venue. The long jumper could be seen embracing the rain and dancing to the Hayward Field music between jumps.

“I was just really happy to be back on the runway,” said Davis. “I wasn’t trying to win, I wasn’t trying to break any records, I just wanted to have fun and experience my first Diamond League with no pressure.”

Davis, who is known for wearing a cowboy hat and boots after her meets, broke the news to the press on Friday that “the cowboy hat has retired.” After Saturday’s event, she donned a red superhero cape instead.

“You saw me with the cowboy hat, that was when I was with the University of Texas,” said Davis, who graduated from UT in 2021. “Now I’m professional, and I feel like I’m a superhero to myself and to others, so I wanted to be a superhero today.”

The Pre Classic is the first outdoor track event that Woodhall and Davis have competed in together and only the second event together overall. The couple, whose wedding is schedule for this fall, lives and trains together in Fayetteville, Arkansas.

“It’s super fun, it’s a new life in itself,” said Davis regarding life as a professional athlete and living with her fiancé. “It’s a different side of life.”

“Whatever opportunity is given to us, we’ll take it,” Davis added.

With the return of two paralympic events at the Prefontaine Classic this year, the event proved to be a great opportunity for the couple to travel and compete in the same venue. If their smiles and energy are any indication, it seems like both Davis and Woodhall were able to accomplish their goals this weekend.

“We just wanted to have fun,” said Davis. “Being able to do it together is really special for us.”