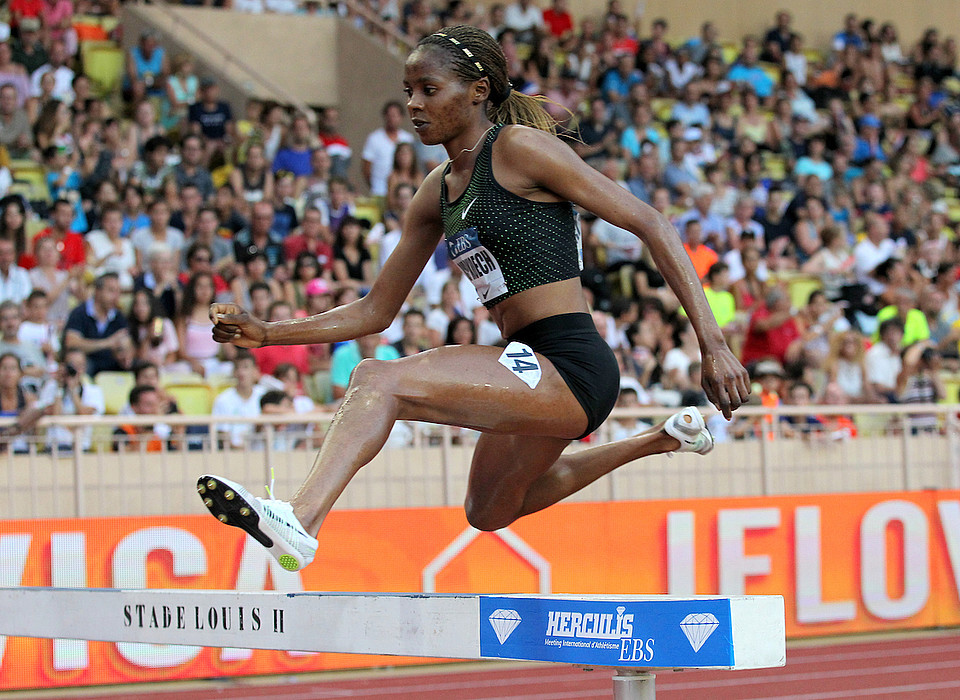 World record holder Beatrice Chepkoech of Kenya will battle American world champ Emma Coburn in a race that will feature six of the world’s eight fastest ever.

Stanford, California – The world record holder will be facing the reigning world champion in the women’s steeplechase at the Prefontaine Classic.

That titanic matchup is only the tip of the iceberg for a deep field that could even surpass September’s World Championships, which will have by-nation limitations on entries.

The Pre Classic has no such restrictions, which means world record holder Beatrice Chepkoech of Kenya will battle American world champ Emma Coburn in a race that will feature six of the world’s eight fastest ever. And not to forget American record holder Courtney Frerichs. Even the pacesetter from the last two world record races is ready to toe the line.

Beatrice Chepkoech, 27, destroyed the world record last summer at 8:44.32. It was just one of a record four sub-9 clockings last year to give her a career total of five of history’s 12 such barrier breakers. She won the IAAF Diamond League title and earned a second-straight No. 1 world ranking by Track & Field News.

As dominant as she’s been, the Kenyan is still seeking her first major medal, having finished 4th at both the Rio Olympics and London World Championships – the latter includes having to run back to make up for missing the first water jump. In Rio she was in medal position with two laps to go before Coburn made a decisive move that Chepkoech couldn’t match.

The Pre Classic has been a spark for Chepkoech – she PRed in the meet’s last two steeple races. Instead of running indoors this winter, she capped her first serious season of cross-country with a 7th-place finish at the World Championships in March.

It wasn’t the first major medal for Coburn, who earned the first American Olympic medal in this event with a bronze in Rio. The Colorado native has won a record seven U.S. steeple titles and has been the top-ranked American for eight straight years.

The Pre Classic has also been a source of success for Coburn – she has PRed in four of her five races, including the first of her three American steeple records.

The American record is now owned by 26-year-old Courtney Frerichs, who nearly entered sub-9 territory last summer at 9:00.85, beating Coburn for the first time in the process. She now claims two of the three fastest American steeples ever.

Her silver in London was perhaps even more startling than Coburn’s victory as it represented a PR by over 15 seconds. The Missouri native won the 2016 NCAA title for New Mexico and was a Rio finalist on her first U.S. team.

Hyvin Kiyeng, 27, won the 2015 World Championships and followed with Olympic silver in Rio and a bronze at the London Worlds. When the Kenyan set her 9:00.01 PR at the 2016 Pre Classic it was an African record and still places her sixth-fastest all-time, just ahead of Frerichs and Coburn.

Kiyeng was No. 2 in T&FN’s world rankings last year – her seventh straight appearance that gives her the second-most world ranking points in the event’s history.

Norah Jeruto, 23, was runner-up to Chepkoech in last year’s Diamond League final and is still seeking to make her first major Kenyan team. She won the 2016 African Championships and the 2011 World Youth (U18) gold when she was 15.

Celliphine Chespol, 20, made her final year in the Junior (U20) ranks memorable last summer,winning a second World Junior gold and adding four more top 10 performances to the all-time Junior list (she now has 8 of the top 9).

She is second-fastest Kenyan of any age at 8:58.78, a world Junior record set in winning the 2017 Pre Classic in a performance made even more remarkable in that she stopped after the penultimate water jump to put her shoe back on, losing some 25 meters to the field.

Making the T&FN world rankings for the first time last year was Daisy Jepkemei, 23, at No. 8. As the fifth Kenyan, it was only the second time that a country had as many world rankers in one year (the other came in 2013, also by Kenya). Jepkemei first raced in the U.S. at the 2014 World Juniors in Eugene, earning bronze after winning gold in 2012 as a 16-year-old.

Uganda’s Peruth Chemutai and Bahrain’s Winfred Mutile Yavi are both 19 but no longer eligible for Junior lists. The duo took silver and bronze behind Chespol at last year’s World Juniors and also made the T&FN world rankings for the first time at Nos. 7 and 9, respectively. Chemutai was fifth in the world cross-country championships in March, while Yavi won a steeple/5k double at the Asian Championships in Doha. Yavi was born in Kenya and transferred to Bahrain when she was 15.

Gesa-Felicitas Krause, 26, has made every world major final since she was a 19-year-old in 2011, including two Olympics and topped by a World Championships bronze in 2015. The German record holder won her second-straight European Championships last summer.

China’s Xu Shuangshuang, 23, was silver medalist in last month’s Asian Championships behind Yavi.
Perhaps the race’s most crucial runner is not expected to finish.

Caroline Tuigong, 29, of Kenya is an ace at setting world-class paces, having done so for the five fastest races ever and the last four Diamond League finals.