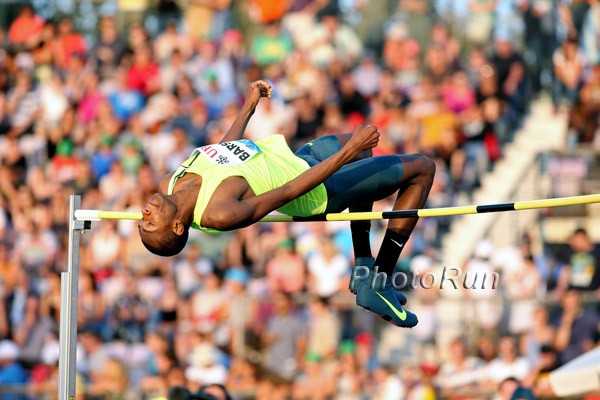 Mutaz Essa Barshim will return to the Prefontaine Classic, where he set the high jumping world on fire in 2013.

Eugene, Oregon – Mutaz Essa Barshim will return to the Prefontaine Classic, where he set the high jumping world on fire in 2013.            The 41st Pre Classic, a member of the IAAF Diamond League of elite international track & field meets, will be held May 29-30 at the historic Hayward Field.             In his last visit to Eugene, the Qatari star fired up a packed crowd with what was at the time both the world’s highest clearance in this century and the highest ever on U.S. soil, an unforgettable Pre Classic victory at 7-10½ (2.40).  He has since scaled even higher and is now on the brink of the formidable 8-foot  barrier (2.44).  Barshim, still only 23, has also improved his medals.  One of three Olympic bronze medalists in 2012, he earned silver at the 2013 World Championships and gold at the 2014 World Indoor.  Many called 2014 the “Year of the High Jump,” and Barshim’s finishing touch in winning the IAAF Diamond League Trophy was jumping 7-11½ (2.43) – higher in history than all but world record holder Javier Sotomayor, who scaled 8-½ (2.45) back in 1993, when Barshim was 2 years old.            Ivan Ukhov is third among the world’s highest-ever jumpers, clearing his best of 7-11¼ (2.42) last year.  The London Olympic gold medalist won the first IAAF Diamond League Trophy in this event in 2010.  A former Pre Classic champ, Ukhov has twice ranked No. 1 in the world by Track & Field News – an honor still eluding Barshim.  The Russian record holder has a complete set of medals at the World Indoor Championships – gold (2010), silver (2014) and bronze (2012).            Olympic medalists Derek Drouin and Erik Kynard will have no problem renewing their rivalry.  American Kynard and Canadian Drouin were 2-3 in that 2013 Pre Classic matchup, just a week before their final NCAA duel – where Drouin won his fifth NCAA indoor or outdoor title for Indiana over Kynard, whose career at Kansas State included a pair of such crowns.  A summer earlier, Kynard was the Olympic silver medalist in London, while Drouin was a bronze medalist alongside Barshim.  Drouin matched his bronze at the 2013 Worlds, where Kynard was “only” 5th.            American Jesse Williams has won many times at Hayward Field, but none more memorable than his 2011 U.S. title at 7-9¼ (2.37) – it stood as the field record until Barshim’s 2013 clearance.  Williams is a two-time Olympian (2008 & 2012) who won gold at the 2011 World Championships.  He collected four NCAA indoor or outdoor titles while competing for the University of Southern California.            Andriy Protsenko of Ukraine will be making his first appearance at the Pre Classic.  He was bronze medalist at last year’s World Indoor Championships after making the final in the 2012 London Olympics.  Also making a first appearance is 22-year-old Russian Daniil Tsyplakov, who won the European Indoor gold in March.  Chinese indoor record holder Guowei Zhang was only 21 when he finished 5th in the incredibly deep 2013 Pre Classic.  He has been a finalist in each of the last two World Championships and World Indoor Championships, and just cleared a world-leading 7-7 ¾ (2.33) on April 3rd.             Note that every competitor in the Prefontaine Classic/IAAF Diamond League high jump has a lifetime best of 7-8 (2.34) or higher.