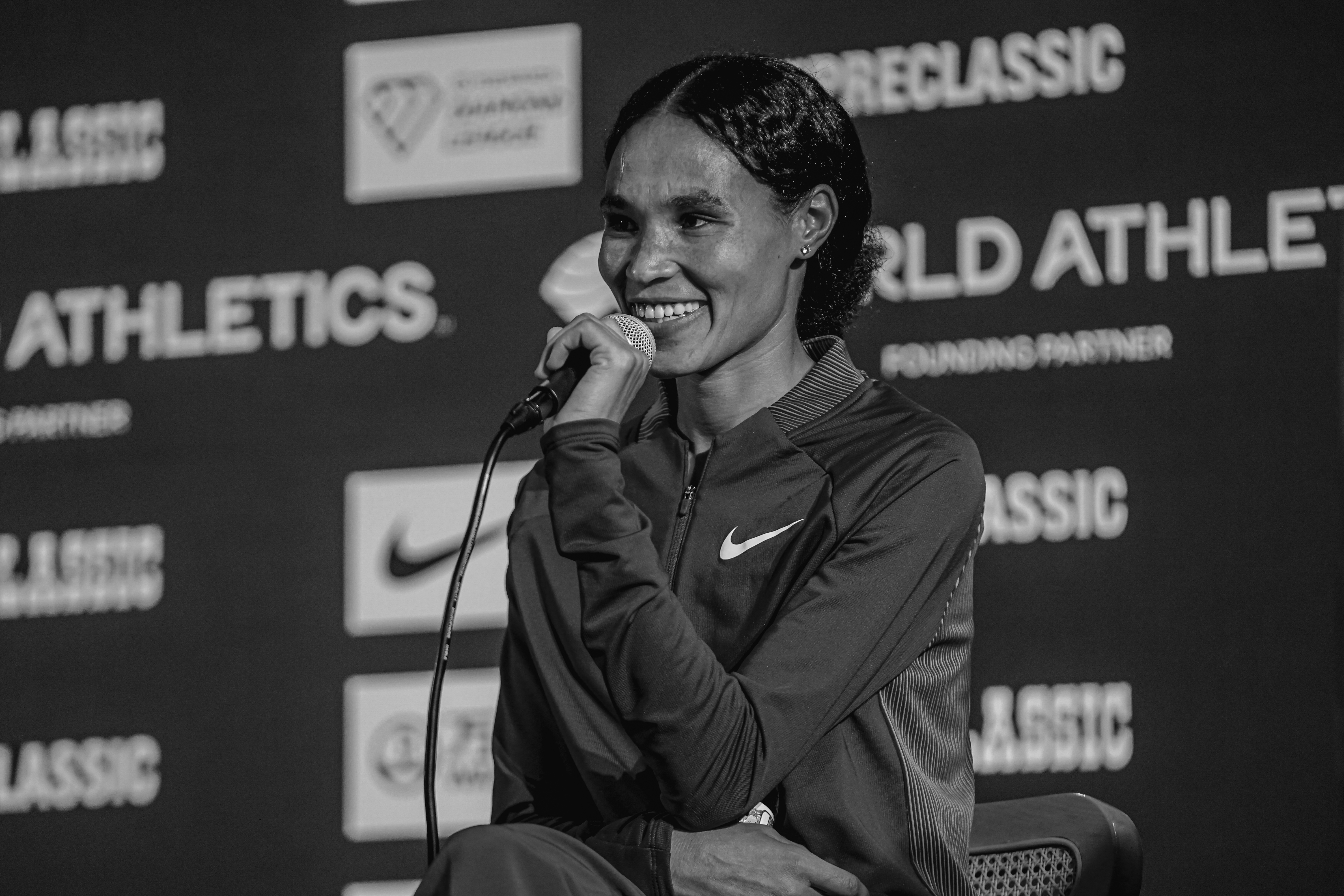 Letesenbet Gidey at the Thursday Press Conference ahead of the 2022 Prefontaine Classic. Photo by Mikeisha Kelly

Letesenbet Gidey, Joshua Cheptegei and Francine Niyonsaba all have plans to attempt their respective world records at the 2022 Prefontaine Classic at Hayward Field. The three long distance runners have all arrived in Eugene, Ore., and are set to compete in the Friday evening portion of the Pre Classic.

“I hope we can see something tomorrow,” Cheptegei said. “[Hayward] is always a place where dreams are achieved.”

Back in 2014, Cheptegei made his way to Eugene on just his third international competition. The current 5,000m world record holder and reigning world champion in the event experienced his first taste of victory on the world stage after winning 10,000 meters at the 2014 World Junior Championships at Hayward Field.

“The plan is to try to run fast,” Cheptegei said. “I’ve prepared in the months leading up to this event and am in really good shape, so [the world record attempt] is still on.”

Gidey will also attempt to break her current 5,000m world record on Friday night. Her record of 14:06.62 set in October of 2020 will be tested on Friday, as long as the weather cooperates.

“I did my training, I prepared very well and I’m in good shape,” Gidey said. “If the weather condition is good, I will ask my coach and we will decide for tomorrow.”

Since setting her world record in the 5,000m, Gidey also set a world record in the 10,000m in June of 2021 and claimed the bronze medal at the Tokyo Olympics later that summer. While a world record attempt Friday night at Hayward Field is still uncertain, Gidey feels adequately trained for the possibility as long as the weather is in her favor.

As Niyonsaba prepares to race the women’s 2-mile, she knows that a world record could also be a possibility on Friday night. The current world record of 8:58.58, set by Meseret Defar in 2007, stands just over two seconds faster than Niyonsaba’s current personal record. She ran this time last summer at the Pre Classic.

“I’m really proud of myself to be here in front of a home crowd,” Niyonsaba said. “Returning here to Eugene, I feel like I’m home.”

While Niyonsaba used to specialize in the shorter distances like the 800 meters, she no longer can compete in races between 400 meters and 1,500 meters. The 2016 Olympic silver medalist in the 800m was banned from competing in those shorter distances because of a condition called hyperandrogenism—a result of having too much testosterone for a female sprinter.

Although the 800m was Niyonsaba’s specialty, she took the challenge into her own hands and upped her mileage as a way of transitioning to longer distance races.

Although these three athletes are unsure of their race conditions on Friday night, one thing is for certain. They all have a plan to chase down their respective world records and feel confident in their preparation and determination