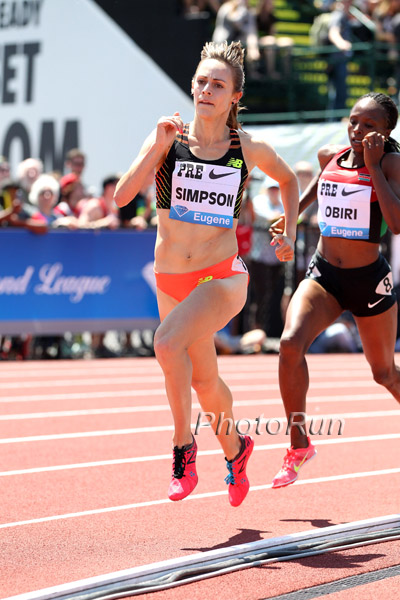 Traditionally, American women have had trouble making it to the top of the podium of the Pre Classic 1500. But this year, look for a strong U.S. group to make a strong statement at the front of the pack.

Eugene, Oregon – Traditionally, American women have had trouble making it to the top of the podium of the Pre Classic 1500. But this year, look for a strong U.S. group to make a strong statement at the front of the pack.

Jenny Simpson is the only American to rank No. 1 in the Track & Field Newsworld rankings women’s 1500 meters since Mary Slaney did it twice in the '80s. The IAAF Diamond Trophy winner last year, Simpson matched another Slaney feat in 2011, winning the World Championships gold medal.  She ran a lifetime best of 3:57.22 last year – just a tenth of a second off Slaney’s 31-year-old American record.  The 28-year-old Colorado alum has done big things at Pre before, in ’09 becoming the only collegian ever to break 4:00 in the 1500, while finishing 2nd.

Shannon Rowbury has ranked among the world’s top 10 by T&FN in six of the last seven years, including four times as the top American.  Rowbury was the best American in the last two Olympics (6th in 2012 after a 7th in 2008) and earned bronze in the 2009 World Championships.  She is coming off her best indoor season, scoring a victorious mile/2-mile double at the U.S. championships and winning the Millrose Games mile at 4:24.32. She also has the fastest 5k PR in the field at 14:48.68.

Treniere Moser is a four-time U.S. champion who is running her best in her 30s.  Now 33, she has recorded PRs at every distance above 800 in the last two years, including a mile PR 4:27.49 this year.  Moser set her 1500 PR in the 2013 Pre Classic.  She ran on USA’s World Record-setting distance medley with Rowbury at the World Relays earlier this month.

Emma Coburn is America’s best-ever steeplechaser, bettering the American record last year set by Simpson, a fellow Colorado grad.  Coburn won last year’s IAAF Continental Cup and ranked No. 2 in the world by T&FN – best ever by an American.  A former NCAA indoor mile champ, her 1500 best is 4:05.29.

And there's newcomer Alexa Efraimson, who at 18 has two years remaining in the Junior ranks.  Last weekend she lowered her 800 best by over 2 seconds to 2:01.13 (winning by almost 5 seconds), making her the fastest Junior in the world so far this year.  She won the U.S. Junior 1500 title last year as a 16-year-old, and in 2013 joined Jordan Hasay as the only boy or girl to win a distance medal at the World Youth Championships with a bronze.  She dazzled fans with her sprint finish to win the 2013 Nike Cross Country Nationals.

Then there are the international stars:

Sifan Hassan of the Netherlands trailed only Simpson in last year’s T&FN world rankings.  She won the European Championships last year as a 21-year-old and added a silver medal in the 5k.  This year she won gold in the European Indoor.  Hassan was fifth in last year’s fantastic Pre Classic, when five ran sub-4 (the only race ever on U.S. soil with more than two).

Another young runner in the field is Ethiopia’s Axumawit Embaye.  As a 19-year-old, she earned silver in last year’s World Indoor Championships.  The Pre Classic will be her first race on U.S. soil.

Great Britain’s Laura Weightman and Hannah England have combined for every national 1500 record since 2010 (England 3, Weightman 2).  England, a former NCAA champion while at Florida State, is a two-time World Championships finalist, earning silver in 2011 behind Simpson and a 4th in 2013.  Last summer, Weightman claimed bronze in the European Championships and silver in the Commonwealth Games. She owns an 8-6 career head-to-head record over England in the 1500, with their only U.S. pairings in the last two Pre Classics (where they are 1-1).

Renata Pils is a five-time Polish champion in distances ranging from 800 to 3000 meters.  She has been her country’s fastest 1500 runner in each of the last four years.

Australia’s Zoe Buckman called Eugene home for four years while running for the University of Oregon.  She won two Pac-10 titles and was fourth in the 2008 NCAA 800.  In last year’s Pre Classic, she set her 1500 PR at 4:04.09.  A three-time Australian champion, she was a finalist in the 2013 World Championships, finishing 7th.