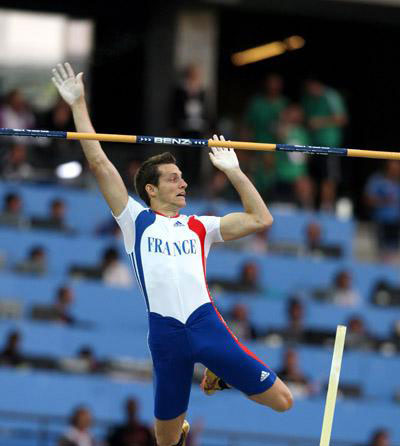 Renaud Lavillenie should have his own runway. The dominating pole vault world record holder and Olympic gold medalist is returning to the Prefontaine Classic.

Eugene, Oregon – Renaud Lavillenie should have his own runway.  The dominating pole vault world record holder and Olympic gold medalist is returning to the Prefontaine Classic.

The 41st Pre Classic, a member of the IAAF Diamond League of elite international track & field meets, will be held May 29-30 at the historic Hayward Field.

Renaud Lavillenie has a rendezvous with the Pre Classic on May 30th.  But this one is no secret.  He is the only 5-time Diamond Race winner in any event and reigns as the Men’s Athlete of the Year by Track & Field News.  His fourth European Indoor title this month in Prague gives him twice as many as any other in the event.

His stature in the pole vault is legendary – he has been ranked No. 1 in the world every year since 2010 by T&FN, a streak of years exceeded only by former world record holders Sergey Bubka of Ukraine and American Bob Richards, the event’s only 2-time Olympic gold medalist.

Only an injury and countback on misses has kept Lavillenie from a major international gold since the London Olympics.  Konstantinos Filippidis of Greece won gold when Lavillenie was sidelined with an injury at last year’s World Indoor Championships.  Raphael Holzdeppe of Germany won the 2013 World Championships gold as Lavillenie also cleared the same height.

Sam Kendricks is the newly crowned U.S. indoor champion.  He has twice won in Eugene, taking the NCAA crowns for Mississippi in 2013 and ’14.  He also has a gold from the 2013 World University Games.

More world-class talent is part of the Pre Classic field, which consists of nothing but 19-footers: